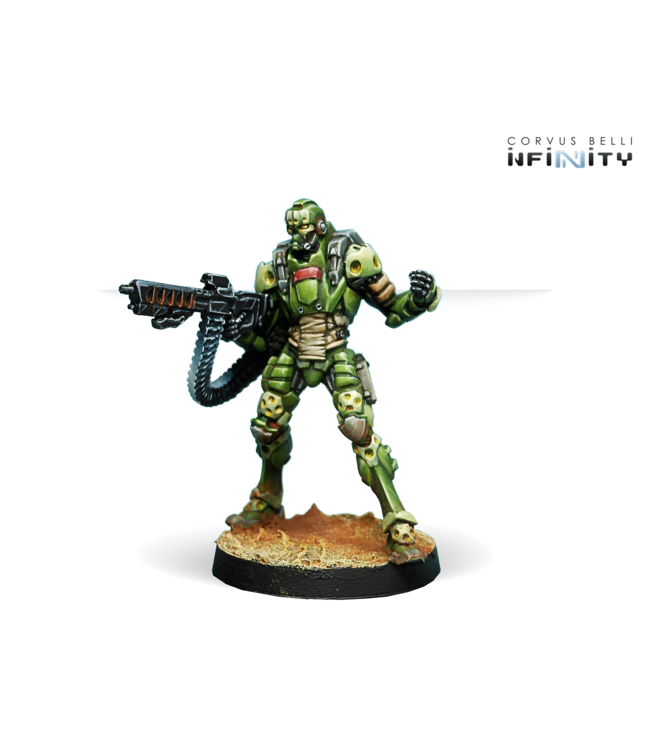 The Janissaries are a heavy line infantry regiment, trained hard to fight and resist till the last man. They are equipped with tactical armored exoskeletons, and their mission is to stand the toughest combats. Read more..

Janissaries are a heavy line infantry regiment, trained to an excruciating extent to fight and resist to the last man. Equipped with tactical armored exoskeletons, their mission is to withstand the worst of any combat. The Janissary Regiment is made up of the Orphaned, the Donated and the Delivered. Its members are recruited from Funduq orphanages and among children of non-Haqqislamites freely donated to the service of Haqqislam. The Government accepts these children to convert them to the one true faith and as a sign of their parents’ commitment and loyalty. In colonies located in some of the most inhospitable areas of Bourak, many dhimmi parents, followers of other religions, give one of their children away for them to have a better education in the city and, with it, better future prospects. Some of these kids are sent to high-performance training centers around Funduq, where they are educated in the Haqqislamite creed and the military life.  Young Janissaries are raised into solid warriors and staunch believers who reject the faith of their biological parents, vowing instead to defend Haqqislam’s ideals to the death. All Janissaries forgo Cubes: at the start of their training they are surgically outfitted with a temporary inhibitor that precludes any memory/personality recording. Upon being released from service, the inhibitor is removed and the former Janissaries can continue their lives as full Haqqislamite citizens. It is a way for them to prove their firm adherence to their ideals, and their commitment to a duty they will see through or die trying. They do not fear death, for their strength lies in their resolve and their faith. As disciples of Haqqislamite philosophy, some of them join advanced courses of Tebb al Nabi, the Prophet’s Medicine, and become excellent field surgeons, whose service is invaluable to the Sword of Allah. The exact same training and surgical process is applied to Orphans taken in by the State, and some say the Delivered also undergo the process. The Delivered are children of infidels captured by slave traders in their razzias. What slavers cannot sell in the private market, they sell to Haqqislam, who takes them in to save their lives and raise them into courageous warriors of the Faith.

The Janissaries are a heavy line infantry regiment, trained hard to fight and resist till the last m..