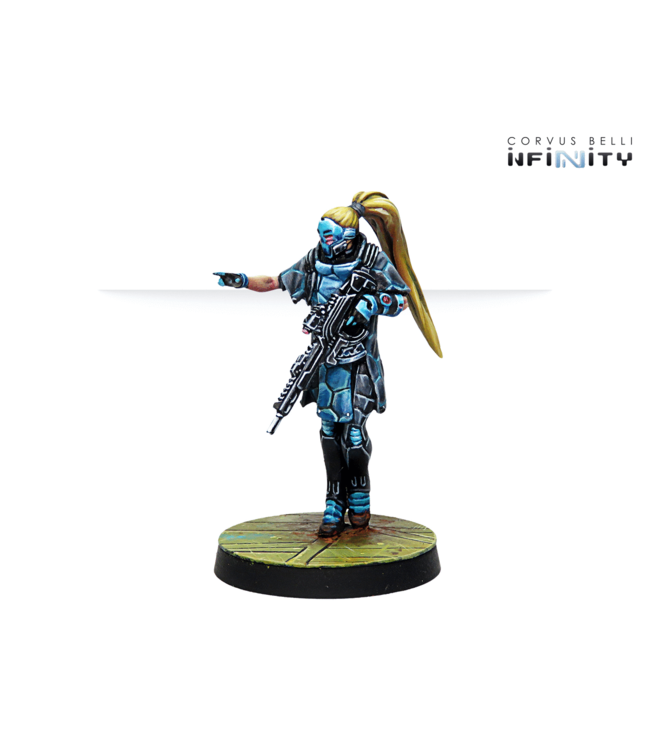 Take advantage of his Camouflage and Forward Deployment to hunt down enemy Hackers thanks to his Killer Hacker Device and protect your Varuna Immediate Reaction Division from infowar threats. Read more..

Zulu-Cobras are proud heirs to two historically notable elite units, and as such they have elected to honor their roots through their regimental codename. Zulu stands for the Z Special Unit, a majority-Australian Allied Special Forces unit that operated in the Pacific during WWII. Cobra alludes to the illustrious CoBRA commandos of the Indian police force, a unit that specialized in asymmetrical warfare and jungle survival. Modern Varuna’s Reconnaissance and Special Intervention Group (RSIG) covers the competences of both of its precursor units, resulting in a rapid deployment Special Forces team at home in both amphibian and jungle warfare. Their unique operational profile sets them apart from the bulk of the PanOceanian military, and in their isolation as a forward reconnaissance asset they have developed their own ethos and regimental customs. As the sun sets, Zulu-Cobras abandon their camps and head toward the absolute vanguard of the front. Some of them adorn their face-plates in the likeness of Death, like ancient warriors. Consensus among PanOceanian soldiers dictates that Zulu-Cobras are more than a little unhinged, and everyone gives them a wide berth as they emerge from their quarters. Who wants to get in the way of Death’s duty?

Take advantage of his Camouflage and Forward Deployment to hunt down enemy Hackers thanks to his Kil..