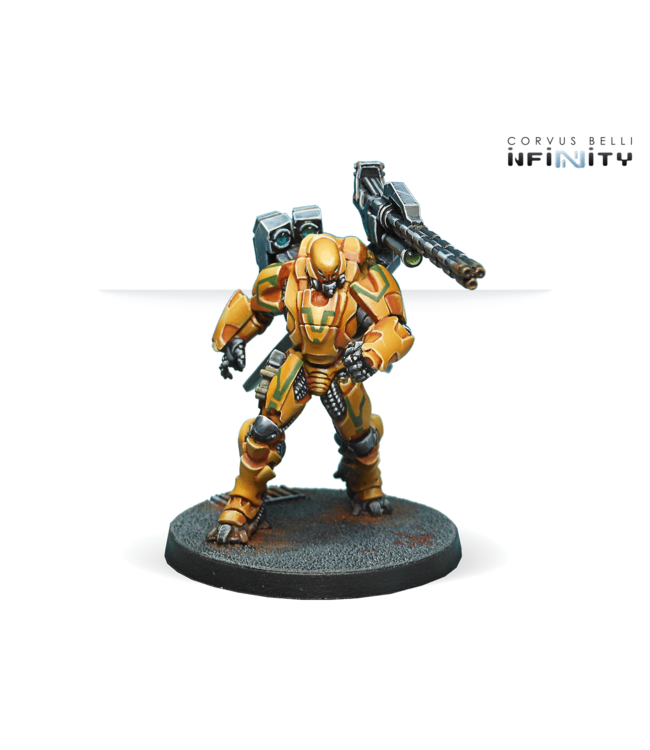 These Invincible specialists are awesome heavy infantry support troops. Bulky, heavily armed and armored, the Yān Huǒ are ready to deploy a rain of fire over the enemy! And shooting a Hyper-rapid Magnetic Cannon, the destruction is sure! Read more..

Any who have seen the Yān Huǒ Regiment in action, unloading their terrifying firepower, know just how fitting their nickname is. The regiment’s name means “fireworks” in Chinese, written with the characters for “smoke” and “fire” (烟火), although the latter also means “rage, anger”. The incredible pyrotechnics unleashed by the members of this unit are as spectacular as they are fearsome. The firepower of a single Yān Huǒ could be used to raze a small country to the ground. The operational maxim of the regiment is the overabundance of ordnance, and in that spirit they have a close relationship with Yungang, the primary arms contractor of Yu Jing, who always make sure to supply the Yān Huǒ with the bigger guns in their catalog. Generally speaking, when a Yān Huǒ decides to empty his magazines and spray the battlefield with his powerful artillery, that’s when things end. Their armor suits are not built to withstand enemy fire, but to carry their armament and attack, with the goal of keeping the enemy busy. When the Yān Huǒ jump into action, their opponents are overwhelmed by the onslaught, and are unable to develop an operational strategy while their life expectancy quickly wanes. The exchange of fire is no longer counted in the seconds, but is accelerated into painful milliseconds. Round by round, strike by strike, their enemies fall one by one, unable to believe what rains down upon them: thunder and lightning, the flashy, deadly fireworks of the Yān Huǒ Regiment.