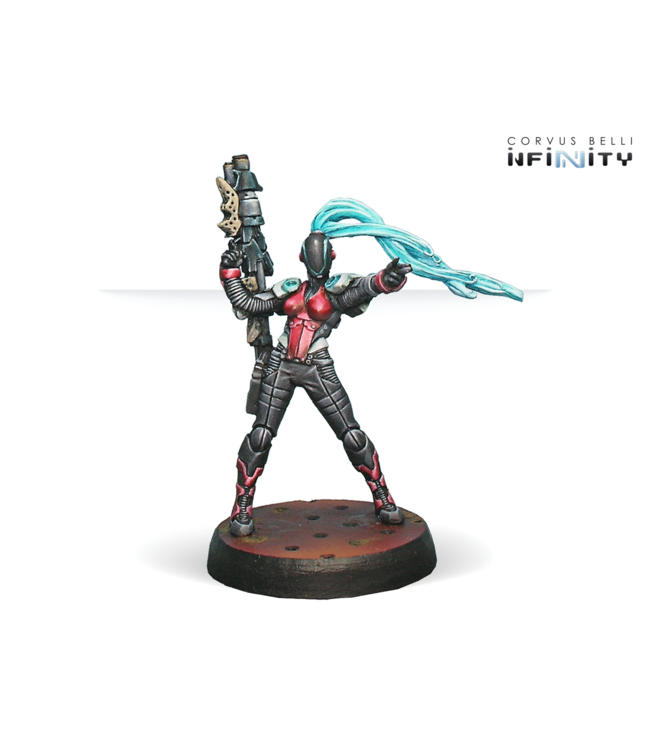 You have probably never heard of the Mkuki Soldiers, or the Barabara Vita, the Road Wars that devastated part of Africa in the days before the building of the Orbital Elevator of Oriental Africa. Now they are just a footnote in the pages of history, but in their day they were a tragedy as brutal anything the African continent has seen. At that time, a number of corporations were competing against each other by drawing communication and trade lines to the Orbital Elevator. Many of these routes passed through ancestral tribal territories, so rival tribes were enlisted and armed to expel people and clear the way for the new roads, or to murder workers from other companies. The methods of these irregular troops were savage and they were known as Mkuki ("spear" in Swahili) Soldiers for their habit of impaling their victims to instill terror in the populace. Over time, the Mkuki Soldiers were declared war criminals and disbanded. Some of them paid for their crimes, but many hid among the refugees displaced by the works of the Orbital Elevator.
Obviously, one can imagine that some of them ended up in Lazareto, the refugee module of Corregidor, where they tried to establish a small extortion network. Discovered by the Alguaciles, the Mkuki came to the attention of Sarmiento, the "Mexican General", who was interested in establishing a specialized mobile shock unit able to be promoted by Corregidor on the mercenary market as a complement for its Alguaciles. So he offered them the chance to participate in his military project or to go for a walk through the airlock. Those who accepted Sarmiento's proposal were instructed in advanced combat techniques, which they combined with their experience in the African conflicts. So the Wildcats were born, a group formed from the biggest sons of bitches that emerged from African tribal wars and were polished in conflicts across the whole Human Sphere, always working for Corregidor’s interests, just under the Nomad Nations flag... or in the highest bidder's service.
Now things have changed. There are no more Mkuki, but the unit still recruits sons of bitches - preferably hardened in Corregidor street fights, or from a tough life working in space - and subjecting them to harsh training. Because what has not changed for the Wildcats is the kinds of missions they run: high priority, high risk, always requiring hostile contact with the enemy, no matter whether they work for the Nomads Military Force or under a contract.
In the Jurisdictional Command of Corregidor, the Wildcats lack glamour: they are not undercover agents like the Intruders, they are not children’s heroes like Tomcats, and they don‘t make high speed transorbital deployments like the Hellcats. The only thing they have is their reputation, the reputation of being skilled at killing. Wildcats have specialized in basic soldiering tasks: shooting, movement and teamwork, until they can do them with great perfection and mastery. They are expert shooters who act in synchronization with absolute precision. Wildcats are the guys that do the dirty and hard work, the perfect mercenaries, capable of performing any operations without asking questions. Their mission is to engage in combat and always maintain a high level of aggressiveness to destroy the enemy's operational capacity. In other words: go in shooting and give no quarter. True wild cats, hence their name.