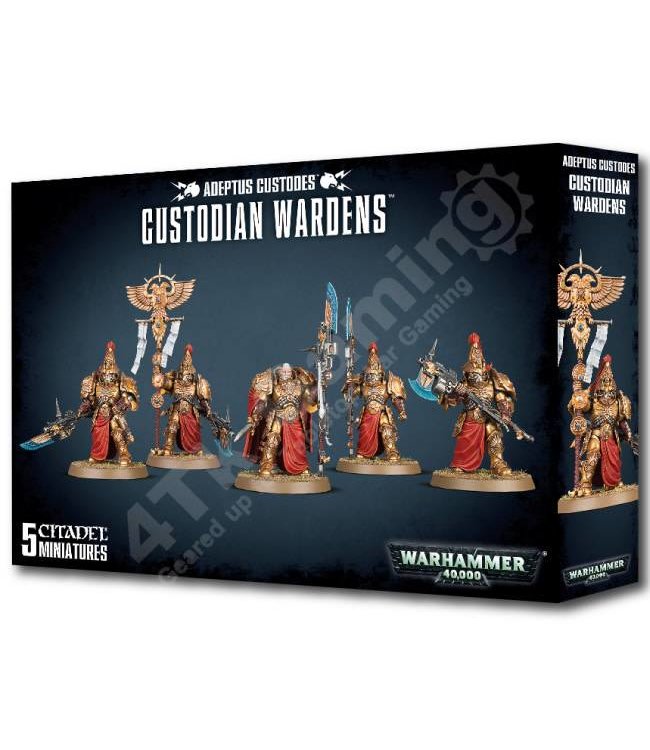 Immovable sentinels who watch over the Emperor himself
Armed with your choice of castellan axe or guardian spear
Kit can optionally make a Shield-Captain and Vexilus Praetor Read more..

Custodian Wardens are known amongst their comrades as level-headed and endlessly patient watchmen. Upon accepting the robes that mark their station they swear binding oaths to fight as immovable sentinels, a living fortress of auramite and sinew that no foe will ever breach. Each Warden’s oaths are personal, written by the Custodian himself after a full year’s contemplation in meditation upon the precipitous ledges of the Gallowtower. To break these vows would be worse than death to these warriors, and their determination to uphold them bolsters their already formidable wills to something of truly frightening intensity.

This multi-part plastic kit contains the components necessary to assemble a squad of 5 Custodian Wardens. Easily recognised by the ceremonial robes they wear over their auramite armour, they’re typically splendid to behold – as with all Adeptus Custodes, every surface of their armour is absolutely covered in beautiful sculpted details, with gemstones, eagles, lightning bolts and filigree wherever you look. Each is armed with a choice of either guardian spear or castellan axe, with 5 of each supplied in the kit. The helmets, helmet plumes and thigh plates in the kit are interchangeable, allowing your Wardens to be unique.

The kit can optionally build a Shield-Captain, who has a choice of 2 bare heads, a unique chest plate, unique shoulder pads and his own set of ceremonial robes – he is armed with the choice of castellan axe and guardian spear, and holds a misericordia. As well as this, 1 model can be assembled as a Vexilus Praetor – along with the standard weapon choices he carries a splendid ornate Vexilla.

The warriors of the Adeptus Custodes disregard the idea of blind obedience, and look with disdain upon those who follow the orders of their superiors without question. Every Custodian has a voice, and is expected to use it; as such, the Ten Thousand respect only those who have proved themselves worthy, whose judgment, strategic skill and strength of mind have been shown again and again. Such Custodians are called Shield-Captains, and their fellows follow them with loyalty and dedication.

This multi-part plastic kit contains the components necessary to assemble a Shield-Captain. He is clad in spectacular, expertly-crafted auramite power armour – this is covered in finely sculpted sigils of the Emperor, with Imperial eagles, lightning bolts, gemstones and filigree covering every surface. The Shield-Captain is armed as standard with with castellan axe and misericordia – he can replace the axe with a guardian spear. Specific helmet plumes, shoulder pads and thigh plates included in the kit make the Shield-Captain distinct from the other Custodian Wardens.

The Adeptus Custodes are a glorious and much celebrated force. In the earliest days of the Imperium they marched to war alongside the Emperor himself, presenting a magnificent spectacle which echoed the majesty of the master of Mankind. Just as their weapons and armour have always been fashioned to reflect his martial glory, so too are the proud standards known as vexillas, which are borne to war by some of the most veteran Custodians. Few shield companies march to war without Vexillas rising above them.

This multi-part plastic kit contains the components necessary to assemble a Vexilus Praetor. He is clad in spectacular, expertly-crafted auramite power armour – this is covered in finely sculpted sigils of the Emperor, with Imperial eagles, lightning bolts, gemstones and filigree covering every surface. He is armed with a choice of guardian spear or castellan axe, but the standout feature of the kit is his enormous ornate vexilla. This stands almost twice the height of the praetor himself (minus the helmet plume), and is an inspiring sight indeed, featuring a huge double-headed eagle with gemstones, spikes and scriptures attached.

Immovable sentinels who watch over the Emperor himself
Armed with your choice of castellan axe or g..