Home/The Hammer And The Eagle (Pb) 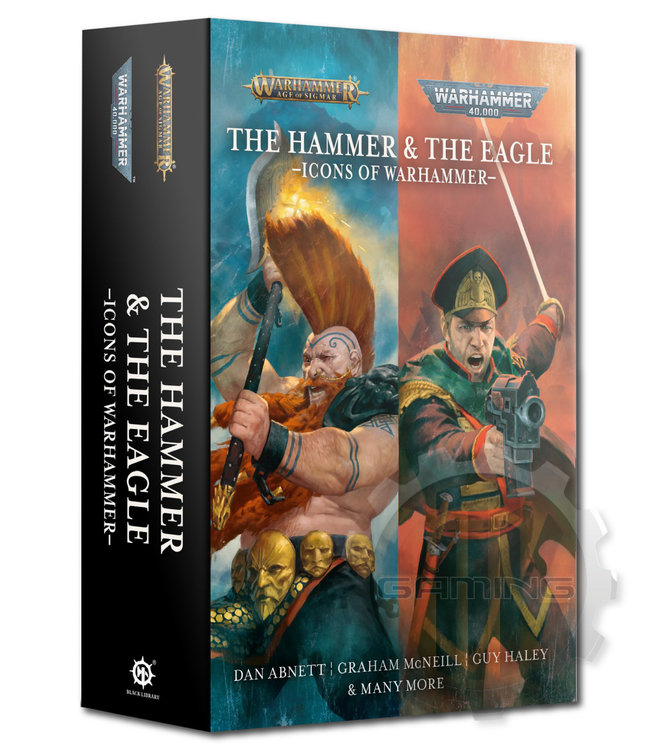 A Black Library Getting Started book

The 41st Millennium and the Mortal Realms are filled with heroes – in this anthology, you'll discover many of them in action-packed tales that will thrill and delight you.

READ IT BECAUSE
Discover some of the greatest heroes of the Warhammer worlds in an epic collection of short stories that encompass incredible deeds and phenomenal heroism.

DESCRIPTION
In the grim darkness of the far future, and in the vastness of the Mortal Realms, there are those characters who stand out amongst all others.

Within these pages, and collected for the first time, are stories of some of Black Library’s best-loved and well-known heroes and villains. On deadly battlefields, Commissar Ibram Gaunt leads his regiment, the Tanith ‘Ghosts’, in a desperate battle for survival; on Ultramar, Ultramarines Captain Uriel Ventris stands as a bulwark against the forces of Chaos; in the shadowy underbelly of the Imperium, Inquisitors Crowl and Covenant ply their clandestine trade. Throughout embattled lands, the realm of gods and monsters, Vampire Queen Neferata seeds dark plots to secure her power, whilst Lord-Celestant Gardus Steelsoul is a paragon of virtue and honour, and drives back the pestilent hordes of the Plague God. These are just some of the legends, the light and the darkness – the icons of the Warhammer worlds.

CONTENTS
Endurance, Blood Guilt and Argent by Chris Wraight
Execution by Rachel Harrison
The Battle for Markgraaf Hive by Justin D Hill
The Smallest Detail by Sandy Mitchell
Of Their Lives in the Ruin of Their Cities and Thorn Wishes Talon by Dan Abnett
Mercy by Danie Ware
The Wreckage, Eclipse of Hope and The Dance of the Skullsby David Annandale
Rite of Pain and Veil of Darkness by Nick Kyme
Chains of Command by Graham McNeill
Redeemer by Guy Haley
Extinction and Shadow Knight by Aaron Dembski-Bowden
Prodigal and Ghosts of Demesnus by Josh Reynolds
Fireheart by Gav Thorpe
The Absolution of Swords by John French
One, Untended and Gods’ Gift by David Guymer
The Old Ways by Nick Horth
Hunting Shadows by Andy Clark
Shiprats by C L Werner

The Hammer And The Eagle (Pb)

Review Black Library The Hammer And The Eagle (Pb)