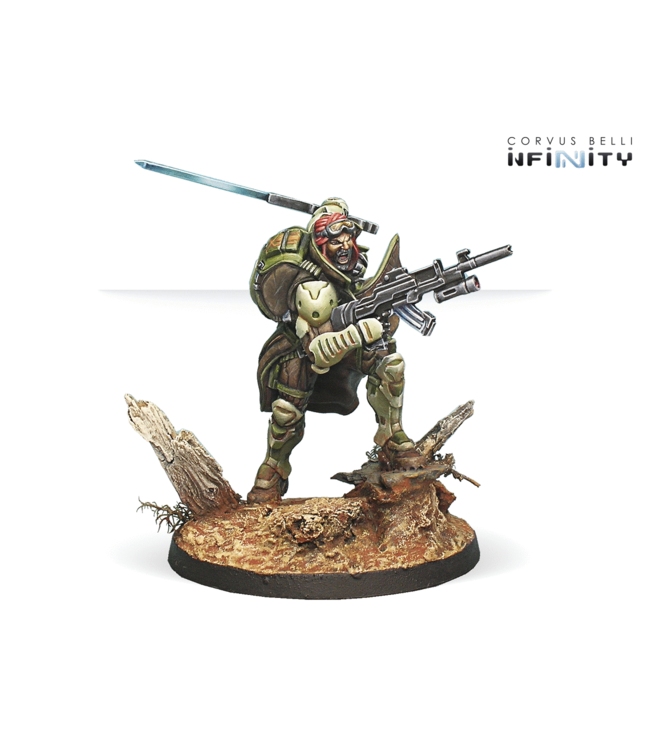 A re-sculpt of the most emblematic hero of Haqqislam! We were not satisfied with the previous model, which didn’t reflect the power and charisma of this special character, so a new version is released - bigger, stronger and more powerful than ever! Read more..

Mansuri is a living legend. He was one of the first Khawarij to undergo Runihura, Haqqislam’s foremost gene therapy super-soldier program. His exceptional metabolism and superior fitness were particularly and surprisingly suited to the treatment. Mansuri’s organism reacted to the Runihura formula in unique ways, making the most of each metabolic enhancement and cancelling out potentially harmful oxidation processes. Since that day, his body has barely aged, always in perfect health and always at the top of his game. He has become a colossus, his extraordinary strength tempered by exquisite precision and quick reactions. His mind is always clear, his senses always honed. He can move faster and kill more easily than any man. The utter perfection achieved by Mansuri stands as the greatest accomplishment of the Runihura program, one that has not been replicated ever since.
As a soldier, Tarik Mansuri is a veteran of the Silk Revolts, the NeoColonial Wars and the Ariadnan Commercial Conflicts. He regards those conflicts with nostalgia, and abhors peace and quiet: ‘Being on duty is living life to the fullest’. In the midst of the action, his blood runs like mercury. In his forty years as a warrior and executioner for Haqqislam, Mansuri has taken part in countless high-risk missions, and has put his life on the line hundreds of times. Lesser men would have been daunted, but not him. Fear has no place in a soldier’s heart, and Tarik Mansuri is a good soldier first and foremost. His discipline is as stern as his personality. In campaign, he refuses to carry a bedroll if he can carry extra ammunition instead. He sleeps in the dirt, even in the worst weather, cuddling with his guns and using his flak vest as a pillow. In battle, even as death looms, he wears a confident smile, but inside is overcome by the turmoil of blood. He never hesitates because he trusts his training and has fought his way out of the hands of fate before, prevailing even as everything seemed lost and his end nigh. In the eyes of Mansuri, Haqqislam rules supreme, and Khawarijs are its best troops. He considers it his mission, and his men’s, to carry his nation to victory. Doing otherwise would be a betrayal of everything he stands for. The Khawarijs are the heart and soul of the Haqqislamite army, and his duty is to be a model to them all.

A re-sculpt of the most emblematic hero of Haqqislam! We were not satisfied with the previous model,..