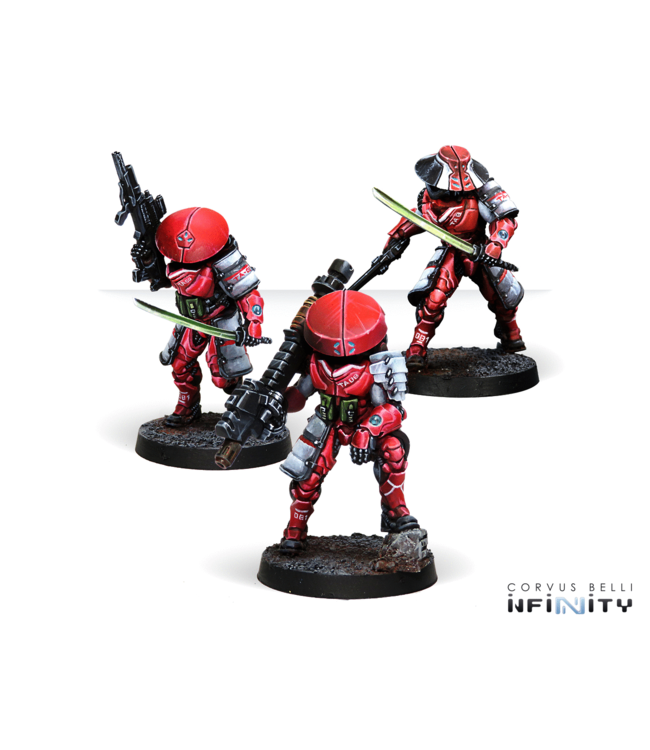 This box includes three high quality metal miniatures. These troops are true samurai and would never shirk their duty at the vanguard of every JSA offensive. Read more..

For the JSA, the Uprising signified an alarming drain of trained, elite troops such as the Haramaki. Faced with unsustainable losses, the Japanese High Command pulled the trigger on an intensive recruitment and training program aimed at replacing battle casualties. Dojos across the country relaxed their qualifying standards and training camps were filled with martial artists that would otherwise have been turned away as prospective Haramaki. But their needs required it, considering Japan was in the brink of collapse. To compound matters, quality craftsmanship suffered a similar hit, especially with the loss of Kuraimori, so a new light powered armor had to be designed. The new models sacrificed some performance for the sake of modularity and ease of maintenance to accommodate the supply constraints of a besieged military. To compensate, High Command furnished this new unit with upgraded weaponry, a cheaper alternative to powered armor.
As per JSA tradition, the new unit was named after their novel armor model, and so the Tankō was born to uphold the operational role formerly filled by the Haramaki: that of a frontline, close-combat regiment. Much like their predecessors, Tankō tend to hail from working-class families and provincial dojos of little note. They have a reputation as boisterous and haughty, always quick to flaunt their acquired samurai status—to the continued chagrin of the solemn bushi-born Domaru. Accustomed to the scarcity of replacement parts, the Tankō have pushed the possibilities of their modular armor to an extreme, and they have become infamous for their habit of diverting or downright stealing supply shipments. As a result, no two armor suits in the Tankō Zensenbutai have the exact same configuration and adornments. But, despite their motley appearance, these troops are true samurai and would never shirk their duty at the vanguard of every JSA offensive. By design and by character, the Tankō Zensenbutai is an absolutely lethal shock force, battle-hardened by their constant presence where the fight is fiercest and courage is compulsory.

This box includes three high quality metal miniatures. These troops are true samurai and would never..