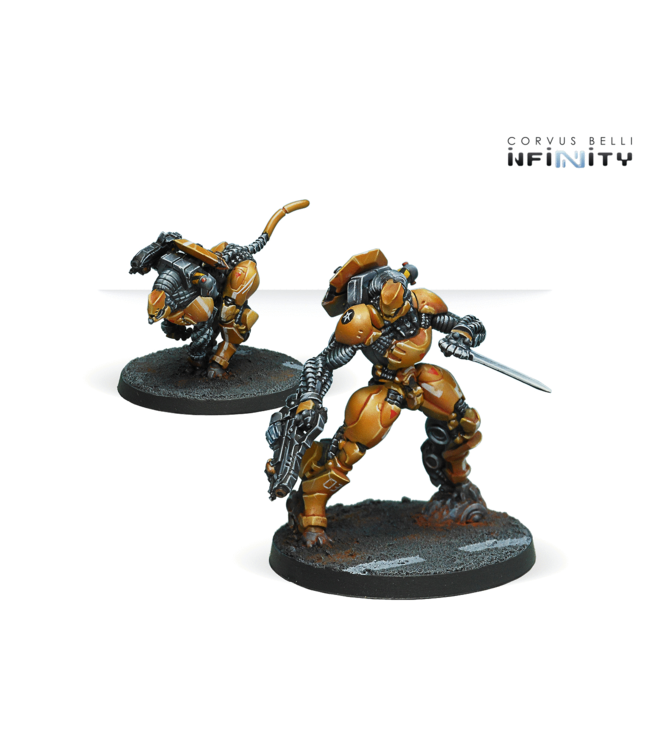 Its High Mobility form is great for reaching forwarded positions while its Combat form is perfect for sweeping out the enemy with its Spitfire. The high versatility of this troop makes it a must have in any Yu Jing army list. Read more..

The Sù-Jiàn Program, “The Swift Sword”, is the weapons system of the future. It goes beyond tactical exoskeletons and other concepts of modern war. It is a sure bet for  progress. A jump into the future. The first step towards a war machine being a true extension of man’s will. The sublimation of the virtual warrior […]
[…] The Sù-Jiàn Program is the jewel in the crown of Yu Jing’s military industry. A Remote Presence Heavy Infantry with variable morphology. The key to its success is the integration of Remote Presence technology, the supposedly PanOceanian great achievement, into Yu Jing’s military specialty: its famous Heavy Infantry armor. Usually, servo-powered armors are slow and heavy, while what was sought was the opposite, nimbleness and mobility. To that end, instead of creating and developing hardware improvements, it was decided to remove the human operator.
After the achievements in terms of hardware from the Karakuri Project, it was necessary to go beyond them and create a precise interface able to reflect quickly and exactly the movements and intentions of its remote operator. The pilot had to become his own armor. For this purpose, it was vital that the remote interface allowed a direct connection with its operator. New neural connections had to be created that would work within the reduced space of a human sized exoskeleton.
Through the interface, a pilot feels the sensation of the exoskeleton getting ready for action. The energy concentrates in the limbs’ accumulators, while the entire system focuses on responding to new challenges, acquiring superhuman strength and agility. The interface also has an onboard tactical assistant, a computer built into the exoskeleton’s connection and control devices. This assistant remains constantly active, processing every situation and predicting future events; tracing trajectories, anticipating an enemy’s movements, guessing the pilot’s intentions and improving them.
The Sù-Jiàn’s variable morphology allows it to exploit both the incredible speed and movement capabilities of its High Mobility shape and the more lethal and precise qualities of its Combat form. In the Sù-Jiàn’s body design the peculiarities of urban combat have been taken into account. The geometry and perspectives of urban fights are very different from those in open fields, as it is much more vertically-oriented. This is why the designers were especially anxious that the Sù-Jiàn would have incredible speed and agility, even on vertical surfaces. The result of this aggressive R&D effort is a unit capable of going where a TAG can’t, thanks to its smaller size, weight and impact on terrain. It is a very quick, agile and mobile unit, equipped with considerable firepower and good armor. All of this adds to the aggressive tactics of its remote operators, creating a highly effective troop in all aspects

Its High Mobility form is great for reaching forwarded positions while its Combat form is perfect fo..