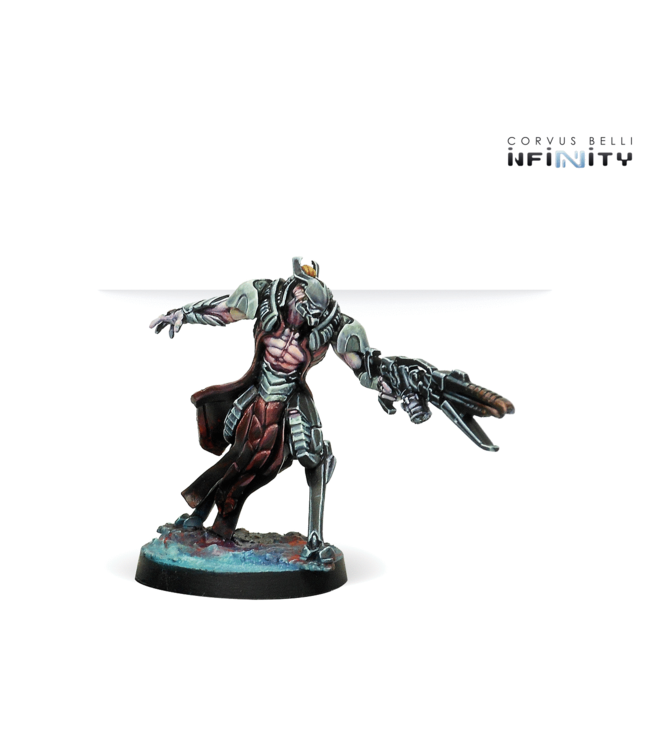 This is a great complement to our Combined Army Onyx Contact Force, providing a higher-versatility specialist operative thanks to his Hacking Device. Read more..

The young Dakel would die five days later. Despite his apparently good appearance, his internal wounds had become infected and the Umbra schooling process did not consider any type of medical assistance. In fact, only three comrades in Dakel’s tithe would survive, and only two of these Urkherits would manage to graduate. This is an exceptional figure since surviving Umbra schooling was always an extraordinary feat.

For hundreds of years, the hills that descended from the Udhit Mountain were one of the prettiest, most peaceful places on that unknown planet. Generations of Urkherits enjoyed the splendor of a privileged, calm setting. It was a prosperous farming community that always respected its gods and worshiped them according to established practices, receiving clear blessings in return. Until one day, when their gods landed on the mountain peak and demanded a tithe of their best young men to accompany them to the stars and serve them there. These young men would learn new things and discover marvelous places. Every season this happened. The ship arrived and the Urkherits offered them a tithe. Brave young men that would never see their home again because all who left to serve in the stars never returned. Even though they were scared to death, all of these young men took up the call because they knew their people depended on them to maintain the happiness and lifestyle of their community. These fortunate heroes were envied by many people who stayed on the mountain slopes and lead peaceful lives.

The Nexus are one of the most valuable assets available to the Supreme Ur forces. They are true experts when it comes to operating in unpredictable environments. Recruited among the Urkherits, one of the Ur’s favorite tool-subspecies, they are tough and adaptable. They have also been improved though special training taught by the sadistic Umbra. The Nexus belong to the explorer class and have been forged for sounding out the universe - sent to the heart of darkness and the borders of eternity and trained to deal with anything they find there.

This is a great complement to our Combined Army Onyx Contact Force, providing a higher-versatility s..