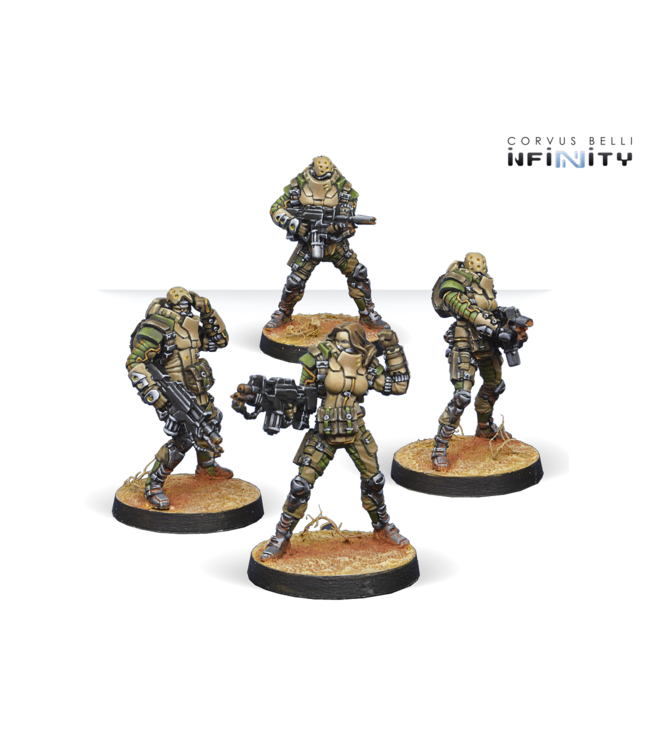 Armed with Flamethrowers plus a Rifle, the Naffatûn are useful and cheap troops, perfect to defend the rearguard from enemy surprise attacks, but also to perform assaults or fight against camouflaged troopers. The versatile Naffatûn will allow you to figh Read more..

Areef (Corporal) Fadia Ashrawi, Naffatûn Regiment. Central Norstralia Front. Paradiso. Second Offensive.
The Naffatûn are a specialist unit of the Ghulam Infantry, capable of operating incendiary armaments. Although their operational profile comprises only assault techniques and close combat skills, the protracted Paradiso conflict has showcased their special aptitude for actions in the planet’s dense jungle environment. Naffatûn are deployed as a light assault force, effective against other infantry forces, to open trails and clear areas of enemy presence, an operation they call “weeding out”, a crude term for an even cruder task.
Naffatûns tend to be left alone in combat. Think about it. They carry as much flammable equipment as they can. Their backpacks are full of extra Napht (hyper-concentrated napalm) charges and their flamethrowers are full of pressurized self-accelerating incendiary gel. A lucky shot, or even a stray bullet, is liable to set them ablaze and turn their surroundings into a fiery hell. Would you choose to stand by their side?

Armed with Flamethrowers plus a Rifle, the Naffatûn are useful and cheap troops, perfect to defend ..