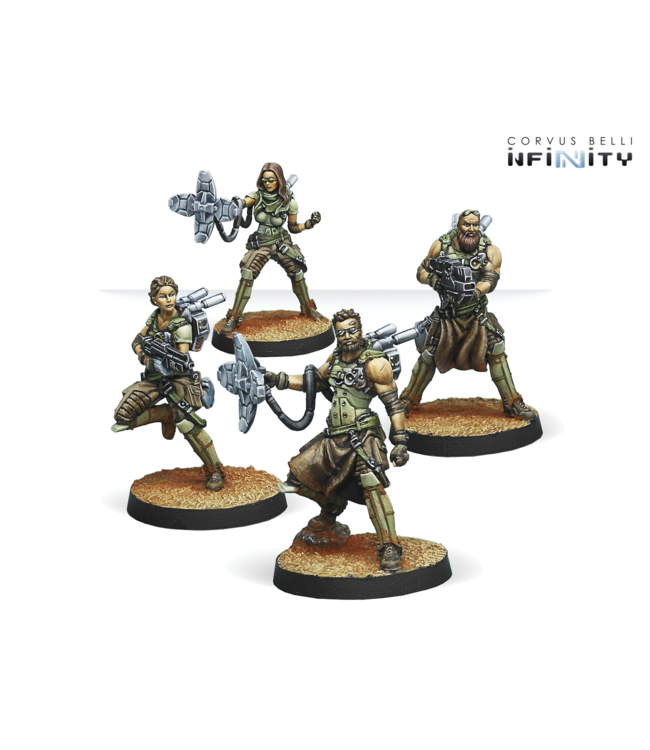 This four miniatures box provides all weapon options of this Haqqislamite unit. The Muttawi’ah are low profile support troops who perform surveillance tasks in covert operations until the moment of action. Read more..

Haqqislamite law is very strict concerning Resurrection. In fact, the Ruh, citizens carrying the Gefr or memory Cube, are not as numerous in Bourak society as in the rest of the Sphere. The Imans only grant possession of the Gefr to those who have shown they possess all the Haqqislamite virtues, and so deserve to be preserved. They are of course mainly members of the upper class elite, or civil servants. However, if a citizen proves to be a passionate seeker of Knowledge, an ardent believer, capable of risking his life for the Faith, then besides winning eternal life, his name will be included in the Library of Heroes, Martyrs and Saints. These people, who exhibit an almost fanatical will, are trained and prepared just enough to be able to be part of the Ghazi Muttawi´ah units. Their equipment is comprised of a trusty Chain Rifle and an E/Marat, a powerful E/M pulse emitter device connected to their cardiovascular system. After a purifying ritual and a memory dump, they are assigned a mission. The Muttawi´ah volunteers are very likely to die trying to achieve their mission, as the E/Marat’s operational range is very short and they have to get very close to the enemy. However, death doesn’t deter them, since they know that if they succeed in their mission, they will be restored in the future as heroes and exemplars of Haqqislam.

This four miniatures box provides all weapon options of this Haqqislamite unit. The Muttawi’ah are..