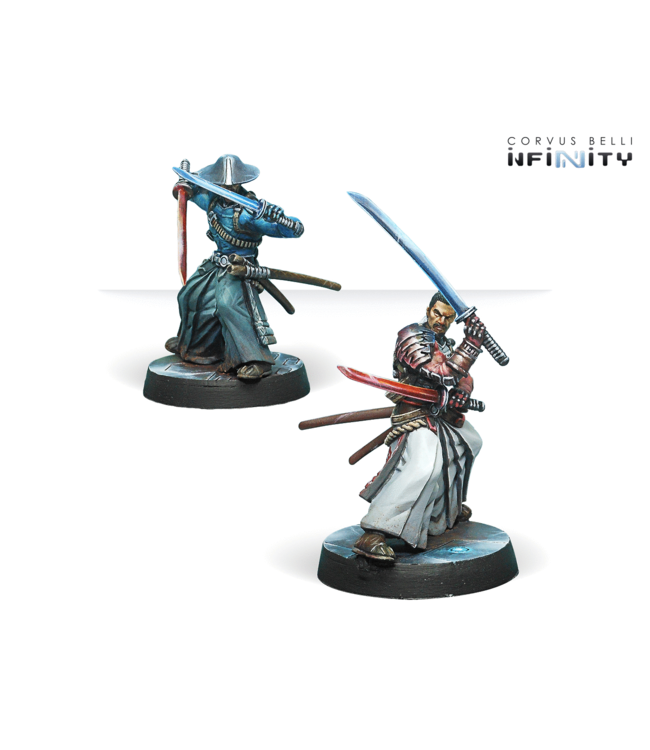 This mercenary is the Recreation of the legendary kenjutsu master that, after a career as sport fighter in Aristeia! broke free from ALEPH’s control, becoming a fugitive that sells his skills to the highest bidder Read more..

Dangerous and lethal, Miyamoto is an expert in close combat, there is no enemy able resist his attacks. A perfect miniature to collect or to deploy in the Japanese Secessionist Army.

Shinmen Musashi no Kami Fujiwara no Genshin (1584?-1645), who chose as his adult name the town where he was born, Miyamoto, was a famous Japanese master swordsman and ronin. He took part in more than sixty duels, of which he lost none, and three military campaigns. As a master, he achieved the status of Kensei or “sword saint”, and authored Gorin No Sho, the Book of Five Rings—or Five Elements.
ALEPH created Project Duelist at the request of the Maya network VissioRama, who wanted to reinvigorate its Aristeia! channel with a new star, a Recreation. They asked for a modern twist on the Miyamoto Mushashi persona with the intention of producing a Maya series documenting his present-day Musha-Shugyo, the warrior’s pilgrimage undertaken by the real Musashi in the years 1605 to 1612, only with a slight name alteration to avoid legal issues. The show, depicting his voyages across the Human Sphere and his duels against other Aristos, was an immediate hit. Critics, Aristeia! fans and celebrity worshippers all acclaimed the prowess of this legendary swordsman. “Breathtaking, awe-inspiring. Miyamoto has the skill of a master, the heart of a lion and the zeal of a tiger” (CloseCombat magazine, Maya). And yet, slowly but surely, interest declined and ratings went down. Mushashi was a stern, solemn person, and lacked the necessary frivolity to play to the tune of the Aristeia! star system. The show could be very exciting, but it was not much fun. Like his namesake, with whom he shared his combat experience, he was a warrior at heart, and considered the notion of using aesthetic criteria in combat to be utterly nonsensical. His dueling style was quick and efficient, but not spectacular. It was over too soon for his Maya audience and the VissioRama producers. The network asked for his personality to be erased and rewritten as a flashier, more ratings-oriented duelist. But a hacker, a self-proclaimed fan of Mushashi, was intercepting internal communications at VissioRama and alerted his idol, who immediately vanished into the night.
These days Miyamoto Mushashi is wanted for assault, for breach of contract against VissioRama, for taking part in illegal duels, for the murder of several Aspects and for insubordination against ALEPH—for which he seems to feel a deep-seated hatred. With those charges against him, and with such powerful enemies, he has been forced to live the life of adventure he was born for. The life of an outlaw, a mercenary duelist, a life on the alert, on the lam, in constant danger. An aimless runaway without a home to go back to. Gone for months at a time and forgotten, only to resurface in distant war stories or illegal arenas. All that danger and all those clandestine Aristeia! circuits have honed his martial prowess with true grit. With his personal style of kenjutsu called Niten Ichi or Nitō Ichi (“Two Heavens as one” or “Two Swords as one”), Miyamoto Mushashi has again validated his status as a sword saint, but it is a dark, deadly sainthood.

This mercenary is the Recreation of the legendary kenjutsu master that, after a career as sport figh..