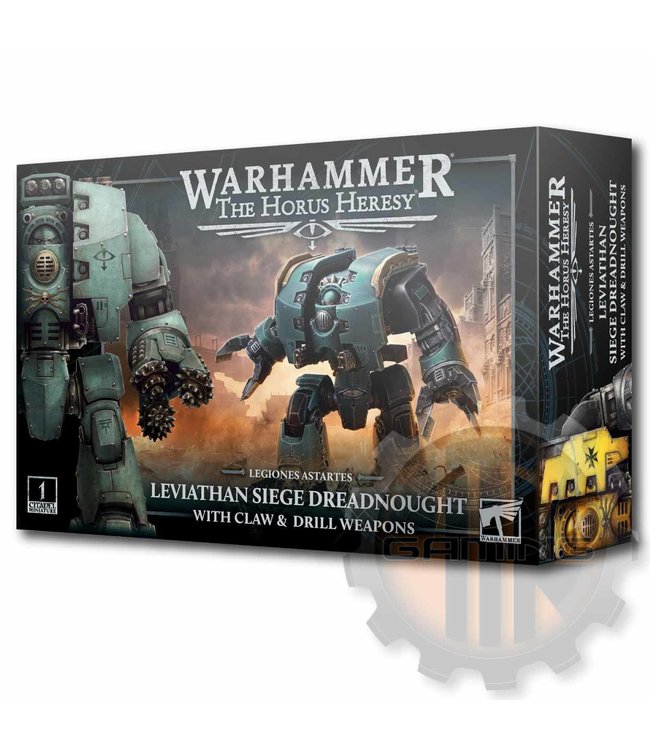 A gargantuan Heavy Support choice for all Legiones Astartes armies
A nigh-invincible behemoth that crushes any foe with its brutal melee weapons
Customise your Dreadnought with a variety of armour plates and poses Read more..

Heavily-armed and impressively armoured, the Leviathan Siege Dreadnought is an alternative development of the highly successful Contemptor design. These rare and mighty engines are prized by Astartes commanders, recognised as savagely powerful siege and hunter-killer units that can crush any opposition with an unstoppable wrecking charge. Yet such overwhelming strength comes at a cost – a Leviathan's systems place an onerous and ultimately lethal strain upon its occupant, the entombed incumbent burning brightly but only briefly in their second life.

This multipart plastic kit builds one Leviathan Siege Dreadnought, an intimidating armoured walker equipped with deadly melee weapons. Each of the Leviathan's mechanical fists are armed with a built-in meltagun, and can be assembled as either a crushing siege claw or grinding siege drill, with individually posable digits. The Dreadnought's torso houses a pair of additional weapons – your choice of heavy flamers or twin-linked volkite calivers – and it can also be armed with an optional hull-mounted phosphex discharger. This impressively customisable kit includes a choice of three different chest plates, two different cowls, and three different groin armour plates. The Dreadnought's joints and head can all be positioned separately for a range of poses, with alternate cables for different arm poses, and foot options to give the appearance of stomping forward or planting its feet to receive a charge.

This kit comprises 153 plastic components and is supplied with a Citadel 80mm Round Base, as well as a Legiones Astartes Vehicle Transfer Sheet containing 44 optional markings and icons for the Sons of Horus and Imperial Fists Legions. This miniature is supplied unpainted and requires assembly – we recommend using Citadel Plastic Glue and Citadel paints.

This kit is compatible with the Leviathan Dreadnought Ranged Weapons Frame, allowing you to outfit your Dreadnought with a variety of powerful heavy munitions.

A gargantuan Heavy Support choice for all Legiones Astartes armies
A nigh-invincible behemoth that ..