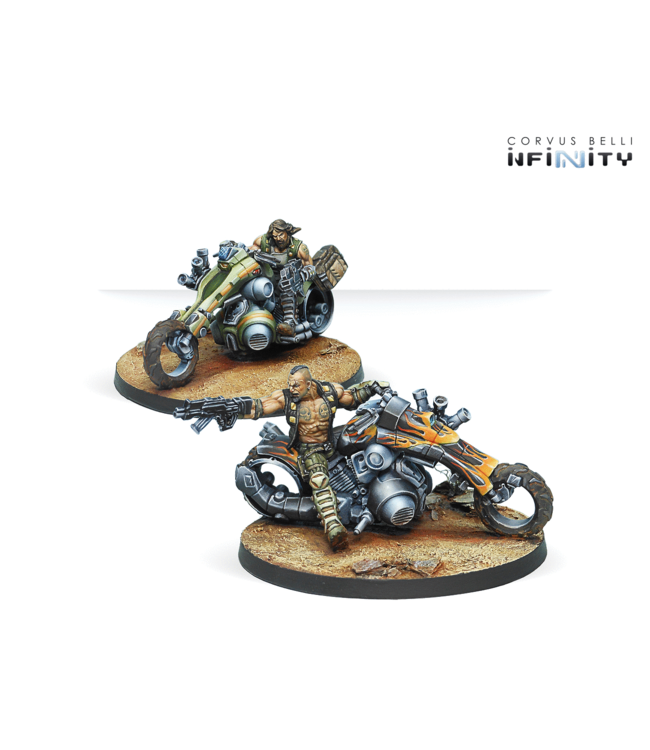 New release! Or maybe not? OK, it’s true the Kum riders are an old release and maybe not new to some players. But this is the re-sculpt of these road warriors and they are now so totally badass we consider them an absolutely new release! Read more..

The Kyrgyz people of Haqqislam are a rough, tempestuous bunch who never obeyed any law but their own. They live on the Tien Shan mountains, where they control numerous drug labs, rudimentary guns factories, counterfeit money printers and well-stocked repair shops. Kyrgyz nomads have an appreciation for alcohol, loud motorbikes and beautiful women above all else. They are a turbulent people, prone to confrontation and revolt. The Haqqislamite army recruits the most famed among them for its Kum motorized units, where they can indulge their aggressive impulses. Riding a thunderous motorbike, these vicious fighters dash into close range to destroy the enemies of Haqqislam. They uphold the age-old Kyrgyz response to the challenges of their enemies: ‘North, South, East or West, where to find the Kyrgyz? By the silver hand of Alexander, look for them around their enemies!’ Zooming around the battlefield on their roaring bikes, Kums have forged a terrible reputation as intrepid, audacious riders… or absolute psychopaths, depending on who you ask. Some say all members of the Kyrgyz biker tribes are a bit unhinged, all we know is these are the most savage, stubborn and daring guys to ever kick and slash their way out of Tien Shan!

New release! Or maybe not? OK, it’s true the Kum riders are an old release and maybe not new to so..