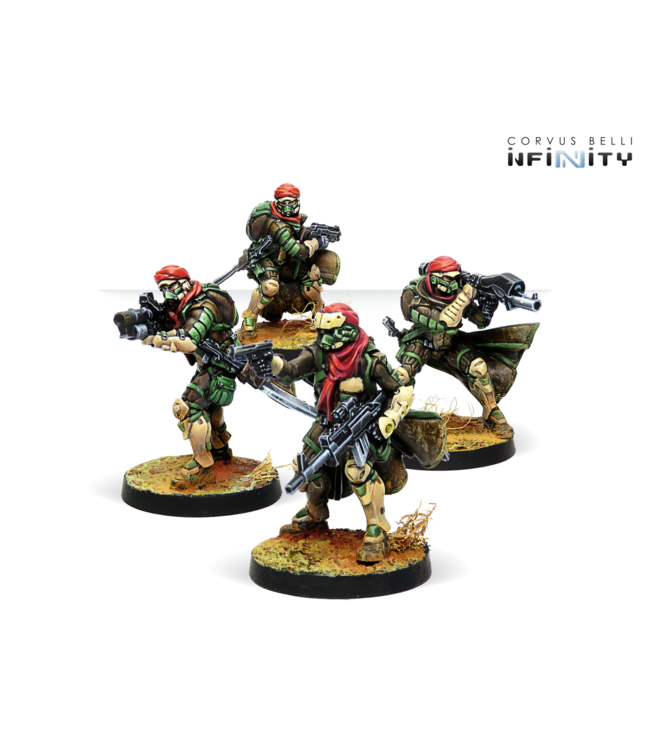 The military-religious brotherhood of Khawarijs, the “Red Turbans”, was founded by a group of HaqqMuztazilite sages to protect Haqqislam from its foreign and domestic enemies. It is a tough, audacious light assault force of supersoldiers that recruits its Read more..

The military-religious brotherhood of Khawarijs, the “Red Turbans”, was founded by a group of HaqqMuztazilite sages to protect Haqqislam from its foreign and domestic enemies. It is a tough, audacious light assault force that recruits its members individually. After a rigorous vetting process, inductees are subjected to Runihura (Destructor), a super-soldier program of intensive genetic enhancement. The main effects of the physical augmentation therapy are increased strength and endurance and enhanced reaction times. Runihura makes every last one of them look like they can subdue a crocodile with their bare hands, but Khawarijs spend as much time studying as training for combat, to the point that they are given the title of ulema, scholars of the Faith. They are highly honored by Haqqislamite society and its army, but their strict code of honor as soldiers of Allah requires them to always be subordinate to Haqqislamite precepts. Their character is dignified yet meek, ferocious yet magnanimous, devoted but never proselytizing, in a “wise contradiction and perfect balance”. Khawarijs believe that Haqqislam can never triumph by straying from the Word of Allah, of which they are sworn defenders. In their mind, the Word can be as sharp as any sword, but they will not hesitate to resort to actual swords if necessary. As a matter of fact, they are excellent warriors to a man, and a shining example to all other Haqqislamite soldiers. They are a common sight in the retinues of Haqqislamite officers as counsellors and bodyguards, and also in the first line of battle, leading assaults like living emblems of the Haqqislamite virtues of resolve, bravery and perseverance.

The military-religious brotherhood of Khawarijs, the “Red Turbans”, was founded by a group of Ha..