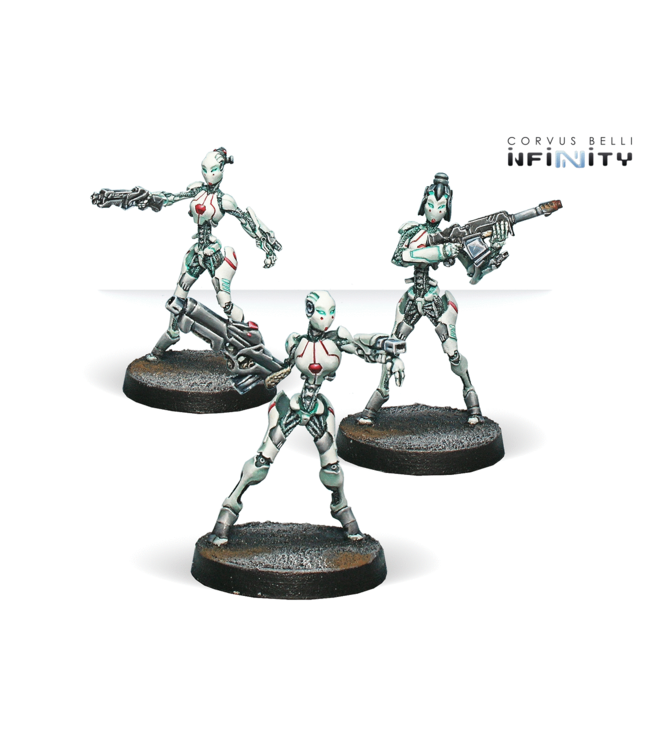 The Karakuri are autonomous robotic military units. Due to their special characteristics they are considered multi-purpose assault troops, also capable of carrying out actions aimed at suppressing revolts and mutinies in the independent Japanese territories. As shock troops their mission is to carry out attacks in the most dangerous areas of the battlefront, moving imperturbably between the crossfire, ignoring any damage, and instilling terror in the enemy with their unstoppable advance.
The Karakuri Project was the great challenge of the Japanese industry: the standard, the figurehead of the innovative capacity of Japanese technological companies within the industrial veil of Yu Jing. The challenge was to design a more agile and resistant remote combat unit with an artificial intelligence sufficiently developed as to not need a field operator. The Project was baptized "Karakuri" because that was the name automated Japanese dolls received during the 18th and 19th centuries. These mechanical marionettes, extremely beautiful and technically precise, served to surprise and entertain their spectators thanks to the motions of their hidden mechanisms. Just like their namesakes, current Karakuri are a truly stunning technological prodigy, a new stage in the evolutionary progress of war machines. Modern Karakuri have also been designed to surprise. They have invisible arsenal hidden in secret compartments located throughout their body: from small arms to an anti-tank projectile. All of their systems and weapons have been miniaturized, compacted, and assembled aspiring to a maximum volumetric reduction. The result is an ultra-sophisticated android creature, a hybrid between woman and machine. With its reinforced steel body, its wasp-like waist, its long legs, and its variety of hidden weapons, the Karakuri end up more feared than beautiful, the erotic nightmare of any combat cyborg.