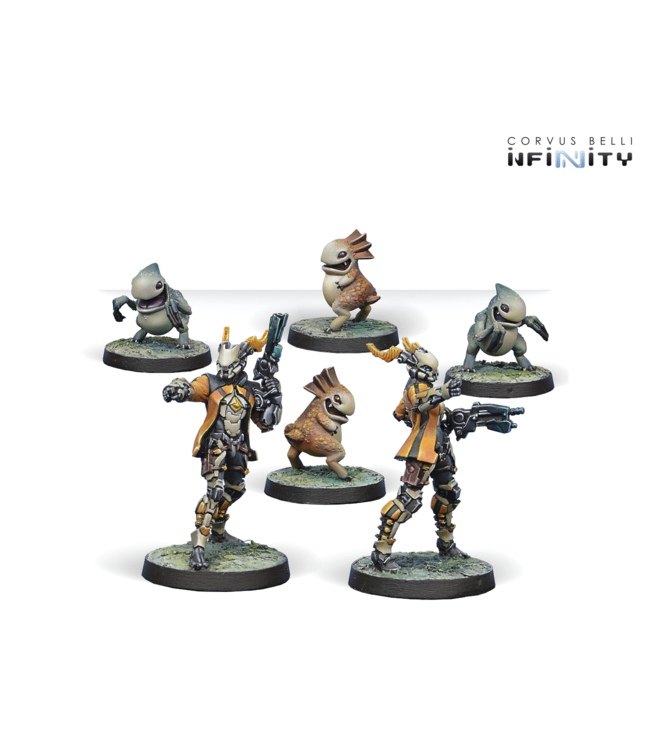 An Infinity unit box and reinforcements for the Tohaa army. This release comes with a new troop profile and rules that will change the how you play the Tohaa. The Kaeltar Specialists are able to take command in any situation and reinforce symbiotic troope Read more..

Note on Vaarso Battlespeak: In the Tohaa Trident, certain support units which employ specific technologies that lie outside the normal realm of tactical operations require designations with double enumeration. According to Neebab Numerology, the number 2 represent dominion, boldness coupled with self-control, and the ability to exert influence. However, the number 10 always reflects difficult situations of ruin and personal loss. Therefore, the meaning of the numerical combination of the Kaeltar (10-2) is dominion, control, and the handling of chaotic situations which have suddenly turned dangerous.
The Kaeltar Specialists make up the difficult situations unit of the Tohaa Trident. They have been trained in the complex Corahtar discipline to control the SymbioMates who provide vital support by improving units which use symbiotic gear and who are expected to face particularly hostile and bloody resistance. Their primary task is to use their pheromonic tools and abilities to contain and reduce enemy aggression. Meanwhile, with their terrible SymbioBombs, they can increase the offensive potential of troops wearing symbiotic armor. However, the Kaeltar Specialists’ tactical acumen goes beyond this. Because of their highly technical specialization and their particular profile, always intervening in high risk operations, all Kaeltar are high ranking non-commissioned officers with ample experience in the field. For this reason, the Kaeltar always keep a cool head in the midst of chaos and are capable of taking command when the team leader falls and the situation becomes impossible. In a unit such as the Kaeltar Specialists, the question is not whether the mission they’ve been given will go to hell, but rather when it will go to hell and how much it will hurt. It is in this moment that they show what they’re worth. Crammed into their uniforms and surrounded by all that esoteric pheromonic gear, the Kaeltar exude tranquility, a vibrant tranquility, as though beneath there were a latent fire within, a fire which needs only the kindling of disaster in order to overflow and take control.

An Infinity unit box and reinforcements for the Tohaa army. This release comes with a new troop prof..