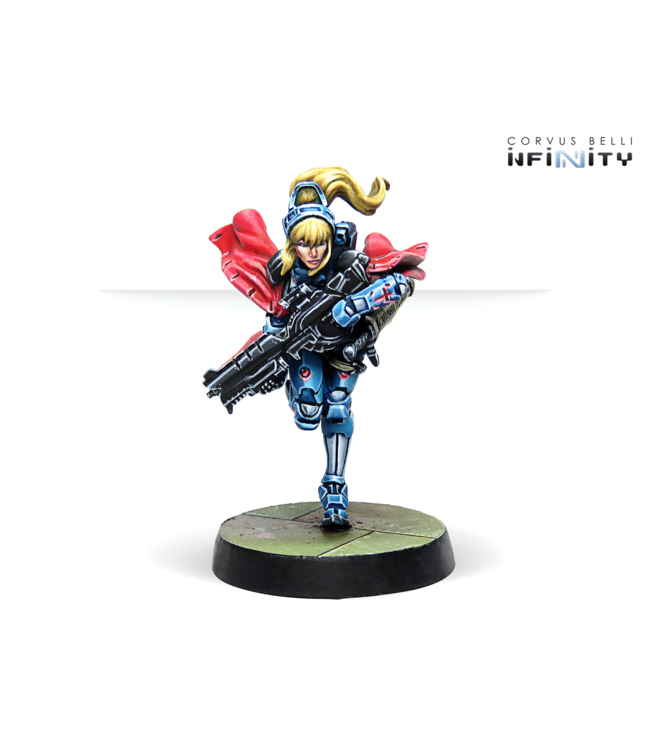 To Joan of Arc, the most natural thing in life is to lead an assault and always be the first in the line of fire. Her combat instinct brings her to the forefront of any engagement, regardless of battle conditions. However, in spite of her inexorable thirst for action, she is aware that a good leader must know how to adapt to the combat environment and that commanding a naval assault differs to skirmishes in the jungles of Paradiso.
For this reason, she has a lighter and more mobile model of armour that sacrifices protection for a higher movement capacity. Geared with this light armour, Joan of Arc is the perfect option to head harassment attacks against superior forces. In these kinds of operations speed is the key: to quickly reach the target, cause the greatest damage possible and then retreat before the enemy can organise a coordinated reply.
With her armour, the beautiful and fearsome Joan of Arc is perfectly capable of unleashing hell on her adversaries, becoming a true messenger of divine wrath.of the Maid was given tactical capabilities far surpassing those of the original, and was subjected to extensive military-religious training inspired by the methods of the PanOceanian Military Orders. Once her training was finalized, she entered the Hospitaller Order, where she was required to persevere in earning the respect of her brothers from the lowest rung of the Order. She was able to rise in rank during the Blizzard Skirmishes against Yu Jing in Svalarheima, and when the NeoColonial Wars broke out, Joan of Arc—already a Sister-Officer of the Knights Hospitaller—was transferred to the Order of Santiago for the defense of the Mars-Saturn circuit.
By the end of this tour, the Maid was a living legend, and having served with her was a source of pride across the entirety of the PanOceanian army. She was ordered to oversee the defense of Neoterra to soothe the fears of the masses during the setbacks of the air-space campaign in the Dividing Line. Rumors of her arrival on a frontline are enough to raise the spirits of troops and inspire them to impossible feats. Under her command, soldiers fight to their last breath, with a ferocity, courage and strength unrivalled in any battlefield. Her presence in a fight is seen as an unequivocal sign of imminent victory. Joan has been described as touched by the hand of God: her eyes are burning embers and her voice is a hurricane. She embodies the very concept of an aura of charisma and power. As the mother-warrior of all PanOceanian soldiers, she is admired by all women and beloved by all men.

High mobility version of Jeanne d’Arc, the charismatic leader who will lead your Military Orders s..