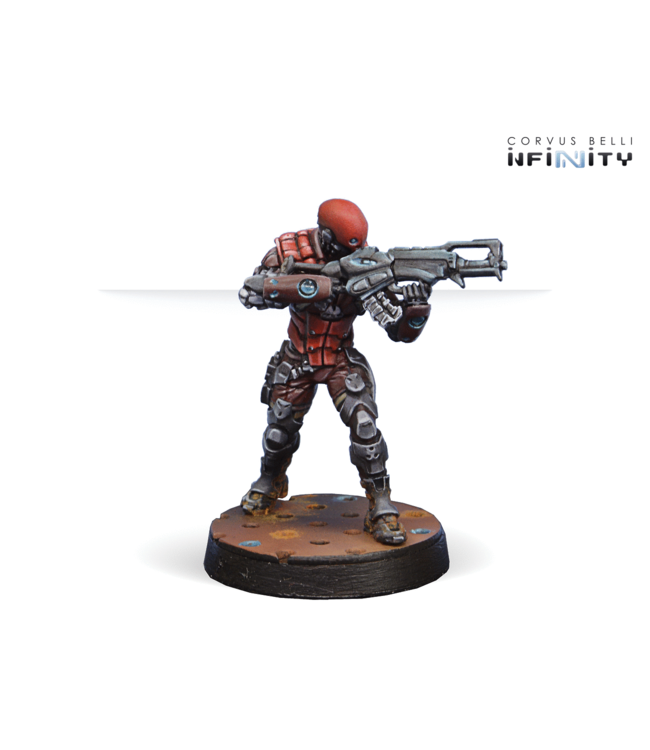 Here comes the re-sculpt of the most famous trooper of the Nomads Army list, the must-have for any player of this faction. Possessing a long range and powerful weapon, Multispectral Visor L2 and Camouflage, this elite trooper is the paradigm of combat eff Read more..

Lieutenant Peter Zakalwe (currently Captain), Intruders, Corregidor Assault Commando. Planning meetings of the Paradiso Coordinated Command. Map Room of the Bureau Aegis frigate Irrevocable Decision. Paradiso far orbit.
The Corregidor Assault Commando has a foul reputation planetside. Whenever a contingent of Corregidorian workers reach their new destination, it is safe to assume there will be one covert Intruder among them. The mission of this lone operative is to assess the on-site security and prepare contingency plans, but many foreign news outlets have openly accused them of inciting revolts against the worker’s contractors. The truth is that Intruders are called in whenever Nomad workers smell trouble. Their job is to safeguard Nomad citizens and evacuate them should things get ugly. If they cannot fulfil the extraction, they must be able to help the workers hold the line until the cavalry arrives.
Other than these special security details, Intruders are always ready for offensive assignments to further the agenda of the Nomad Nation, including small, medium or large-scale conflicts far beyond the scope of any other Corregidorian unit. They are famously feared as assault troops, and accept only the best soldiers from other Corregidorian regiments. They act as an expeditionary corps, scouting new environments, making first contact and gathering information. Intruders can do anything from military intel, to covert ops, to urban combat, to tunnel guerrilla tactics, to sabotage. They also frequently act as military advisers and field instructors when the situation calls for an accelerated boot-camp to turn blue-collar workers into a reasonably capable combat force. However, the real reason why they are feared as the elite of spec-ops teams is their prowess as hunters and assassins. The Corregidor Assault Commando is the one true ace up the Nomad sleeve, because all it takes to control a whole battlefield is one single Intruder.

Here comes the re-sculpt of the most famous trooper of the Nomads Army list, the must-have for any p..