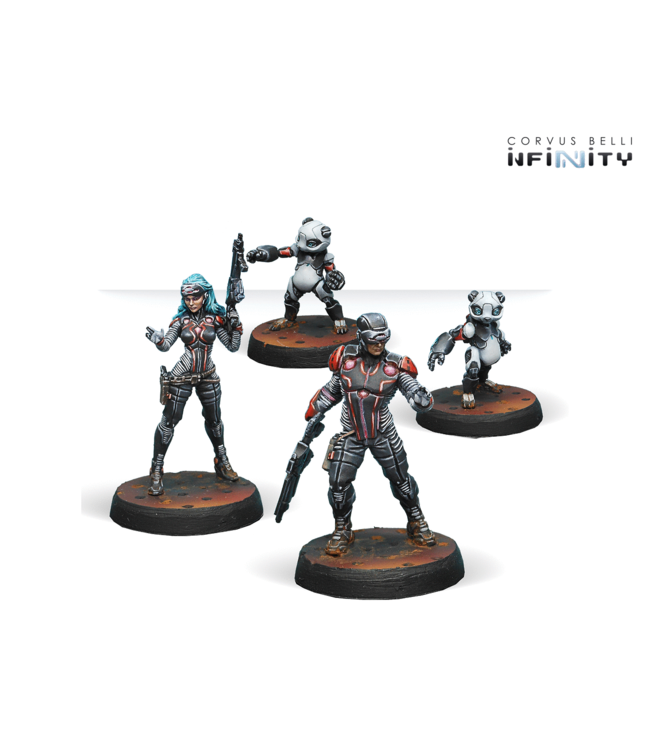 OK, OK - it is true the Interventors have been previously released, but now they have been re-sculpted and come with a new toy: the FastPandas. These tiny bots are deployable repeaters Interventors can place at any point in their Zone of Control. Useful a Read more..

Tunguska is home to the best hackers and crackers in the Sphere. When the economy of an entire country depends on the maintenance of safe information strongboxes, downtime is out of the question, as are data leaks. Tunguska strives to maintain its digital immunity by following the principle that ‘it takes a thief to catch a thief’: the best crackers make the best security experts. Dragnet spares no expense in the hunt for problematic black hats to turn them to the service of Tunguska. By accepting a Dragnet contract, they are given the chance to learn from the best and join the Interventors unit, the elite of datasphere predators. Due their reputation, in Tunguska, the presence of an Interventor is a necessary requisite to guarantee the integrity of any data operation, deposit or transaction bearing a Max-Sec seal. However, the offensive capabilities of these crackers are not squandered on mere security jobs; they also assume duties related to military tracking, interference and electronic nullification. Interventors can provide counter-intelligence and cryptologic support in the field, feeding combat intel to their armies and counter-intelligence to the enemy. Their main purpose is to guarantee the success of electronic supremacy and infowar operations. Their bravery and unparalleled skill commands a great deal of respect from Nomad infantry units and even from TAG operators, who are notoriously disinclined to award credit to units other than their own. Interventors are feared as enemies for their ability to bring whole armies to a standstill. Once communications are cut and remote systems are rendered inoperative, a soldier is alone. Without air, artillery or armored support, without a clue where his comrades are or what the general picture looks like. It’s back to the Middle Age. And then all that technology, corroded by an infovirus, turns against the poor soldier, and the last thing he sees is the Interventor’s electronic signature projected onto his tactical visor…

OK, OK - it is true the Interventors have been previously released, but now they have been re-sculpt..