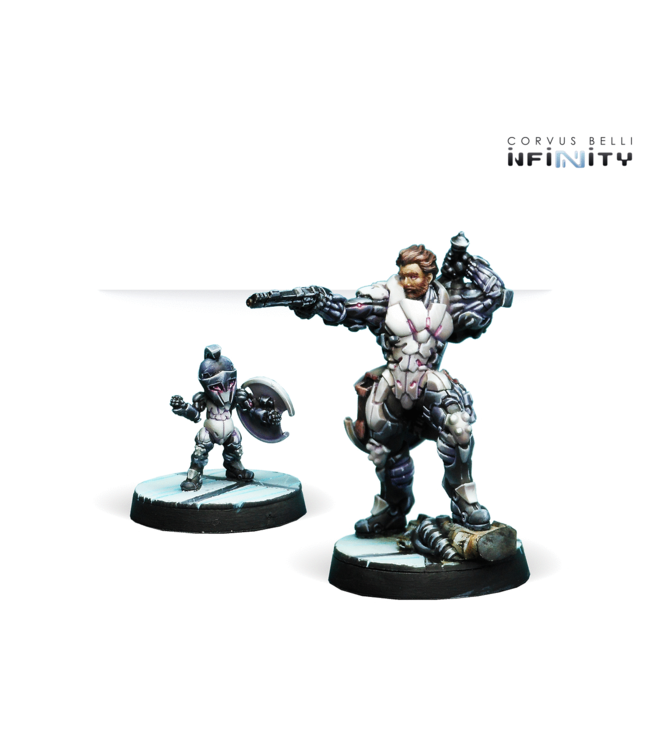 Hector, the mythical defender, is the second in command of the Homeridae. A new troop profile and new special character for the ALEPH’s Steel Phalanx. An exceptional warrior and a superb strategist who will lead your combat force to victory. Read more..

Hector in Greek mythology is the son of the Kings of Troy and commander of the city's troops. He was the greatest of all Trojan warriors and would only fall before the wrath of Achilles; his death signals the end of The Iliad.
Hector was defined by Homer as the counterpoint of Achilles, a calm hero, lover of peace, yet brave and willing to sacrifice his own life to defend his people. During the Middle Ages the figure of Hector personified the authentic, knightly ideal.
Notes from Thamyris the Aoidos to the SSS Information Service:_ "He moved with blinding speed, charging ahead with all his might while avoiding attacks with the skill of a lifetime dedicated to war. His armor made even more powerful the fire that burns inside his body and bestowed it with prodigious force and divine speed. He was astonishing. He sensed the strike and explosion before they arrived with the experience of a veteran fighter. He moved with the speed and fury of... I can't even begin to describe it... I saw there how a single man defeated an entire army. However, the most amazing thing about that endless battle was his indefatigable leadership. His incomparable honor and courage were exactly what those men needed to resist. Hector never doubted. He always knew what he had to do to protect the crew of the frigate, and his life seemed to be a small price for it. How incredibly essential was his pure, intense courage. How different everything would have been if he hadn't been there to guide us during the battle. Without Hector, the frigate Iliad would have succumbed to the enemy, but he knew how to take the victory away from the adversary, a victory that will never be forgotten."_
Hector is currently the second in command of the Homeridae. Nobody could argue against this nomination: not just for his track record but also for his own skills. The way he carries himself, his firm glance and toughness convey self-confidence and an inner strength forged in battle after battle, as if he were an ancient warrior far from home. However, it is his charisma and intelligence when devising tactics and putting them into practice that has helped him earn his position as a leader of the Steel Phalanx. Hector is capable of analyzing any possible situation that arises on the battlefield instantly, and is completely relentless when the time comes to engage the enemy in combat. He is the true warrior/strategist that ALEPH needs to destroy the EI.

Hector, the mythical defender, is the second in command of the Homeridae. A new troop profile and ne..