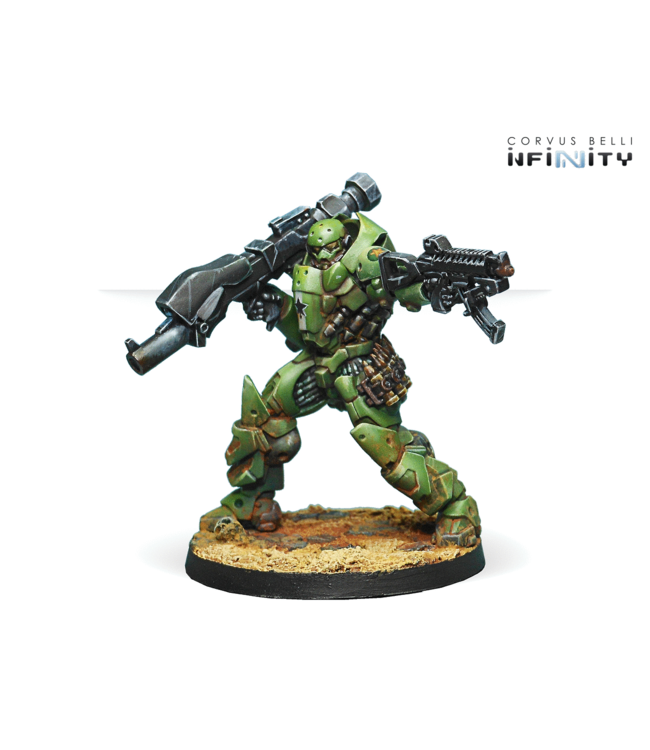 Heavy Infantry to Haqqislam, the hammer with which to hit your enemy, because there is no better defense than a good attack. This huge and amazing miniature is perfect to give you the support of a heavy rocket launcher to your army by the hand of a heavyw Read more..

The Al Fasid (‘The Corrupted’) Regiment accepts only soldiers with a solid operational record who can live up to their grueling battery of admission tests. Beyond proving their ability to do the job, applicants are not expected to answer any questions about their past, which is simply assumed to be checkered.
The regiment is infamous for their aggressive combat methods and their willingness to go to any lengths to snatch a victory. This reputation has earned them the epithet of ‘The Seven Times Accursed’. No Al Fasid is a model of Haqqislamite virtue, but they don’t seem to care in the least. These soldiers don’t fight for the glory: they fight because they need to earn a living, because they enjoy it, or because it’s the only thing they know how to do well.

Heavy Infantry to Haqqislam, the hammer with which to hit your enemy, because there is no better def..