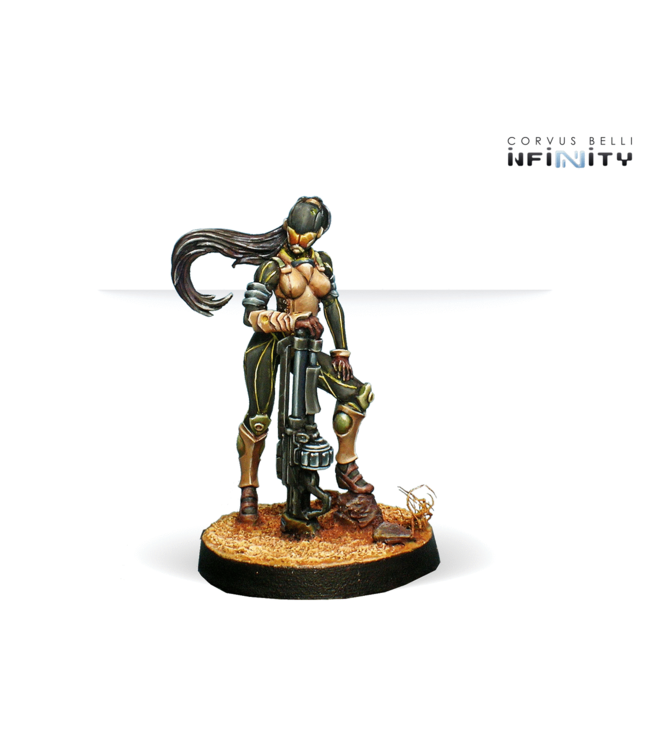 This expert assassin belonging to Hassassin Bahram (Haqqislam) is an offensive troop with very strong melee capabilities. In addition to this, she possesses the Impersonation ability that allows her to mimic enemy troops and go unnoticed. Read more..

Fiday (“they who are willing to sacrifice”) are the angels of destruction, the most fearsome among the Hassassin. Killing the powerful is easy, the difficulty strives in doing it without getting yourself killed. The threat of retribution, the inevitable death of the assassin, is what really protects the rich and influential. But what if the assassin was willing to die? Then, no man would be safe. Herein resides the true power of the Hassassin. Fiday are chosen from amongst those zealots of the Hassassin Society who display the most impressive faith, skill and steadfastness, but who lack the talent for teaching others. A Hassassin capable of becoming an instructor, a Ragik, would never be asked to make this sacrifice. Training a Fiday is a delicate endeavor, for ending the life of an enemy will not suffice. A Fiday is not a mere assassin, but an executioner: he acts in public and sends a public message. A man is killed, thousands are terrorized and, if the Fiday is apprehended, he will die a courageous death. The Fiday strives to earn the admiration of any who witness the act, thus winning more supporters and followers for the Secret Society of Assassins. Fiday are experts in the use and concealment of weapons, in secure forward communication systems, in deep infiltration into enemy territory, in disguise, in impersonation, in tracking and in many other secret techniques. Their uniforms are furnished with real-time holographic mimicry-masking systems, including a computer that generates environmental-immersion effects to enhance the verisimilitude of their appearance, thus facilitating their mission. Fiday are exceptional men in that their faith in a paradise earned by fulfilling their mission makes them willing to face certain death.

This expert assassin belonging to Hassassin Bahram (Haqqislam) is an offensive troop with very stron..