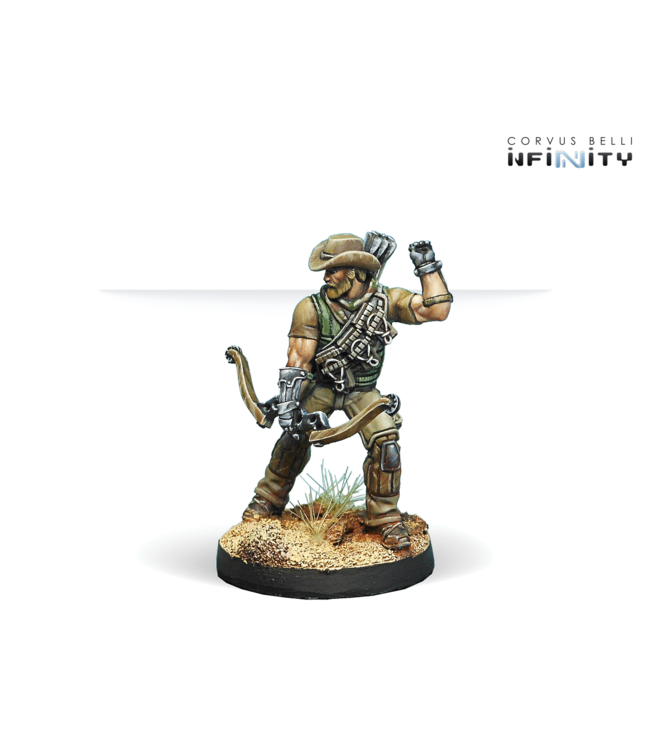 A new addition for the Ariadnan players. The cheapest camouflaged infiltrator of the game, able to kill in silence at short range thanks to his Tactical Bow. This is the first USAriadnan model taken from the Infinity N3 book. Read more..

The USAriadnan Southern Border is barely populated; there are miles between a farmstead and the next and roads are next to nonexistent. A land of adventure, unexplored and dangerous, full of smugglers, bandits and Antipode raiders. A desolate place, but also an untainted place for a man to find Nature and maybe, just maybe, forget the past. It is the obvious refuge of the men and women frontier jargon has dubbed ‘Hardcases’: retired veterans who choose to seclude themselves in the wild borderlands. By definition, these are tough people, intractable, uncontrollable individuals whose company is rarely appreciated. The name is an old word that can be traced back to the American Civil War and the Wild West, keeping the same meaning in the Southern Border. Nowadays, these USAriadnan Hardcases usually find employment as guides, explorers, bodyguards and mail carriers, but also as self-appointed law enforcers. Because, even though they left the military—or were discharged—they sworn an oath to the flag when they enlisted, and the military honor code cannot be revoked with a bureaucratic letter. No self-respecting man or woman can leave an injustice unchallenged, and wherever there is no justice to begin with, they enforce theirs. Over time, the Hardcases have become guardian angels to the farmers and colonists of the Southern Border, fighting off Antipode razzias, chasing down outlaws and heeding the call of duty when their former officers require them again.

A new addition for the Ariadnan players. The cheapest camouflaged infiltrator of the game, able to k..