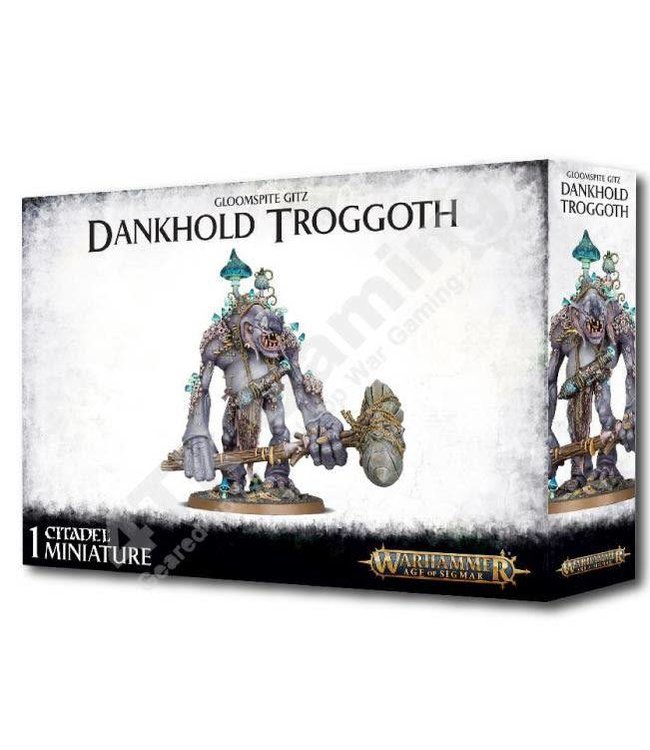 This kit allows you to build your miniature as a Dankhold Troggboss instead. Regardless of your choice of unit, you can customise your miniature with a variety of heads, weapons, arms and accessories for making your models look distinct – great if you're looking to add multiples of these massive monsters to your army. The set also features a host of basing materials you can use on any of your Gloomspite Gitz models.

Dankhold Troggoths sleep deep underground until the Gloomspite moves them to lumber up to the surface and wreak havoc. They swat and crush everything within reach, soak up spellcraft like sponges, and are nigh unkillable in battle.

These massive Troggoths are tough enough to go toe to toe with the biggest monsters in the game and come out on top. Capable of regenerating wounds and shrugging off spells with ease, they’re perfect for any general looking to give their army a bit of extra punch – literally.

Dankhold Troggbosses are ancient creatures that sometimes wake from their subterranean slumbers and go on the rampage. Potent forces of destruction in their own right, Troggbosses also inspire any Gloomspite Gitz fighting in their shadow.

The Dankhold Troggboss takes everything that makes a Dankhold Troggoth awesome and makes it even better. This guy isn't just a juggernaut in close combat, but a great general for your army. He’ll even unlock Fellwater Troggoths and Rockgut Troggoths as Battleline units, allowing you to field an entire army of these rampaging, regenerating brutes.

Shrug off spells and regenerate wounds
Go toe to toe with the toughest enemies
Make your model uni..