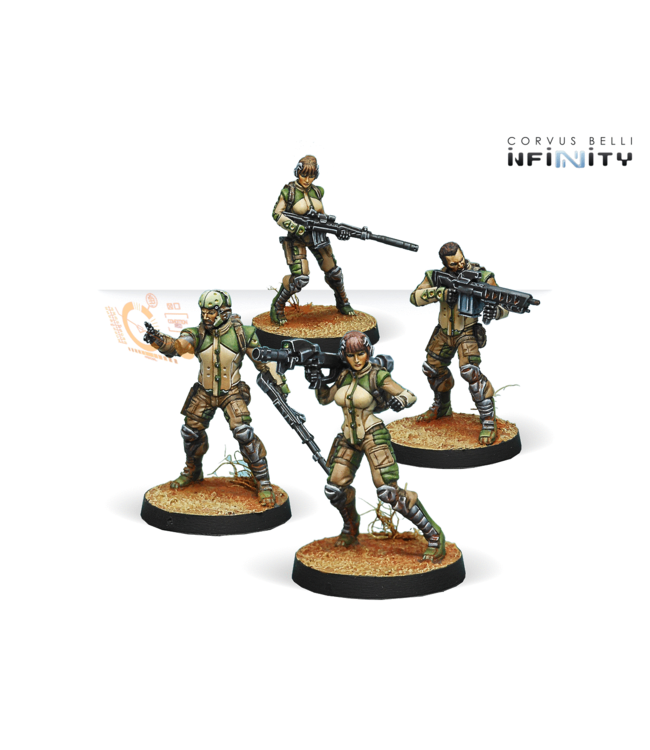 In this new Infinity unit box you can find the most of the remaining support weapon options available for the backbone of the Sword of Allah. Now you can compose a Fireteam of these Light Infantrymen in all Haqqislamite Sectorial Armies. Read more..

The Ghulam Infantry is the biggest military force in Bourak. The Haqqislamite military strategy is built upon the use of the hammer-and-anvil tactic. Using this principle, a hammer of large Ghulam units crushes the enemy against an anvil of small, heavy units and specialists. Haqqislam, less resource-rich than PanOceania or Yu Jing, usually relies on the effective use of numerical superiority. The Ghulam Infantry is prepared to organize an effective, decisive combat force in as little time as needed. It can carry out the bulk of the military operations required by any action or campaign, however long, as well as all contingency missions that might emerge during its performance. The Ghulam Infantry is a regular force full of discipline and fighting spirit. Ghulams are highly motivated because they see themselves as the true defenders of Haqqislam. They are aware that, at the end of the day, it will be up to them to stop any invaders. Even in a technological war, an indomitable will is still the sharpest weapon. All Ghulams are ready to give their life for Haqqislam, the kind of allegiance money can never buy.

In this new Infinity unit box you can find the most of the remaining support weapon options availabl..