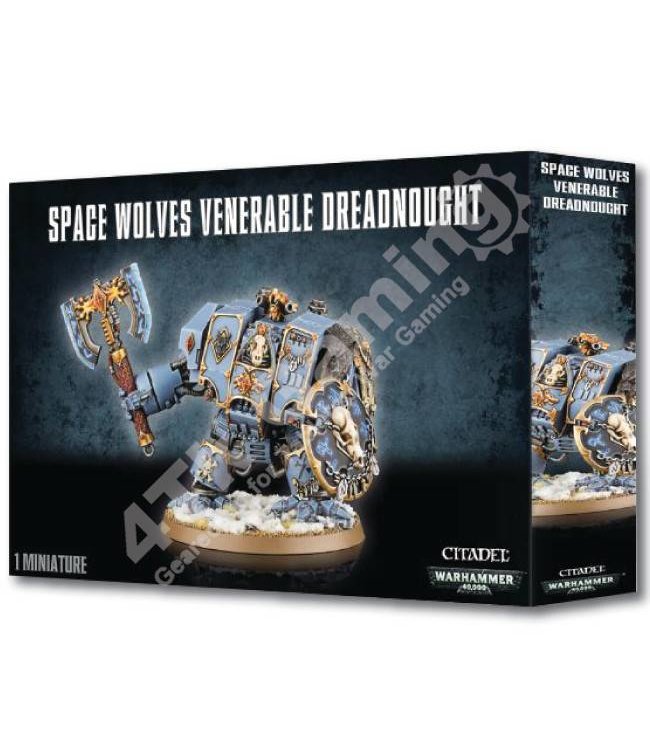 This multi-part plastic kit makes one Space Wolves Venerable Dreadnought armed with a Fenrisian great axe and blizzard shield. This kit can also be assembled as Bjorn the Fell-Handed or Murderfang. Read more..

A towering construct of man and machine, the Space Wolves Venerable Dreadnought is a walking colossus of adamantium and ceramite. Within the talisman-covered sarcophagus lies the remains of an honoured hero of the Chaper, broken in body but not in mind. These warriors have taken to the field of battle in the name of Russ for thousands of years, their wisdom as deep as the ocean and their intuition as sharp as a kraken’s teeth. They are the Allfather’s vengeance made manifest.

This multi-part plastic kit makes one Space Wolves Venerable Dreadnought armed with a Fenrisian great axe and blizzard shield. It comes with a selection of additional weaponry, including a helfrost cannon and a multi-melta.

Named Murderfang by the Space Wolves, this metal-skinned monster was found roaming the hell world of Omnicide. It clearly is a Dreadnought, yet the true identity of the once-noble hero within its sarcophagus is long lost. In times of great strife, this machine-beast is released from its glacial prison and set loose upon the foe, where it will claw, stamp and bite until nothing is left but ruin.

This multi-part plastic kit makes one Murderfang armed with murderclaws.

Interred in a custom-built Dreadnought, Bjorn is a legendary figure amongst the Space Wolves, for he fought in the Horus Heresy amongst the retinue of Leman Russ himself. Bjorn the Fell-Handed is the oldest warrior in the Imperium, serving first as a warrior, then as Wolf Lord, and finally a Dreadnought, to this day he is the spiritual and moral compass for the entire Chapter.

This multi-part plastic kit makes one Bjorn the Fell-Handed armed with a customised lighting claw known as Trueclaw and an assault cannon. It also comes with a selection of weaponry, including a Helfrost cannon.