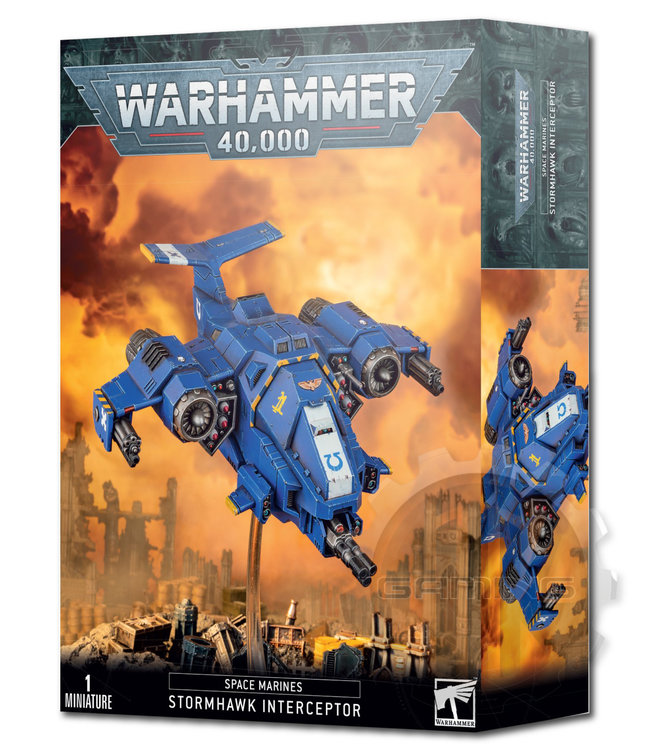 This multi-part plastic boxed set contains the components necessary to build one Space Marine Stormtalon Gunship. This kit can also be used to assemble the Stormhawk Interceptor. Read more..

The Stormtalon Gunship serves the armies of the Adeptus Astartes as both an interceptor and ground-attack craft. It is fast enough to engage all but the swiftest of enemies, and sufficiently well-armed to reduce the chosen foe to a mangle of twisted wreckage and ruined flesh. The tide of many a battle has turned with the thunderbolt descent of a Stormtalon Gunship from the war-torn skies.

The Stormtalon Gunship is a remarkably versatile and dependable craft. On the one hand you can use it as an aerial escort to protect your most valuable units on the battlefield. However, you could just as easily send it screaming across the battlefield at the vanguard of your assaults, alongside your swift ground units and vehicles, ready to plough into enemy lines. Either way, you can depend upon its ferocious firepower. Whether you point its many weapons at enemy positions on the ground or at aerial opponents, you'll find it is more than capable of obliterating the threat.

This kit can also be used to assemble the Stormhawk Interceptor.

An awesome sight, descending at incredible velocities from orbiting warships to engage and annihilate enemy craft, Stormhawk Interceptors are a stunning hymn to aerial superiority that the Space Marines sing with gusto. The frontal armour and huge firepower makes them excellent dogfighters, hurtling through the clouds to execute target after target in a blazing display of incendiary defiance. Often seen in Vehemence Attack Patterns, Stormhawk squadrons and their golden haloes of flares discharged to gently dissuade incoming fire are a signal that whatever planet the skies are over, they belong to the Emperor.

This multi-part plastic kit contains all the components necessary to assemble one Stormhawk Interceptor, ruler of the skies and destroyer of the Imperium’s flying enemies. Armed with a twin-linked assault cannon, a las-talon (which can be replaced with an icarus stormcannon,) twin-linked heavy bolters (which can be replaced with either a skyhammer missile launcher or typhoon missile launcher) and an infernum halo-launcher. Supplied with a transfer sheet, one Citadel 120mmx92mm Oval base and a flying stem.

This kit can also be used to assemble the Stormtalon Gunship.

Great kit. Easy to put together and paint. Also great at dealing with your mates problem Tyranid units that hide behind a wall all game.

Also makes the awesome stormtalon! Such a great and diverse kit!

Great kit. Easy to put together and paint. Also great at dealing with your mates problem Tyranid units that hide behind a wall all game.

Also makes the awesome stormtalon! Such a great and diverse kit!