Home/Daemons Of Tzeentch Lord Of Change 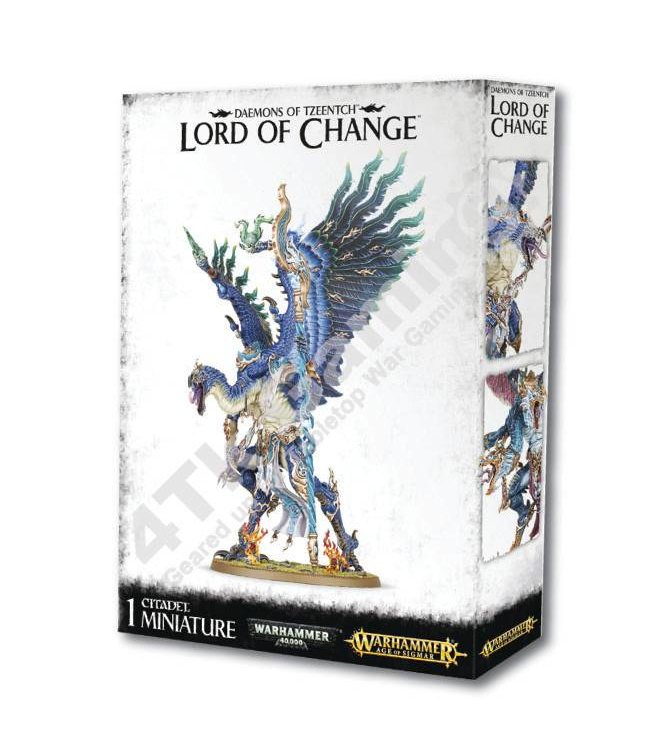 This kit can alternatively be used to assemble Kairos Fateweaver.

This kit can alternatively be used to assemble a Lord of Change.

This kit is supplied as 72 components, and includes a Citadel 100mm Round base.

The greatest of Tzeentch’s daemons, the Lords of Change shimmer with raw magic. With a flick of its claw, a Lord of Change can hurl foes into nightmares, or blast enemies with the wyrdfires of Tzeentch. Such canny creatures can steal opponents’ spells for their own use, or send mutating rays from their rod of sorcery to destroy entire enemy formations.

This multi-part plastic kit contains the components necessary to assemble a Lord of Change. A huge, imposing model, he makes an ideal centrepiece for any Tzeentchian army, covered as he is in the symbolism of Tzeentch that marks him out as a true master of magic. His enormous wings can be modelled in 2 different positions, and he features a choice of 3 different, sinister heads. He wields a staff of Tzeentch, which can be topped with either a symbol of Tzeentch or a flame blade; or can alternatively wield a baleful sword and Tzeentchian wand. He is accompanied by 2 Brimstone Horrors, which can be added to his base.

Kairos Fateweaver can see the past and the future, and uses this ability to twist destiny to suit his own malevolent purposes. This twin-headed terror is a master of magic, able to transform foes into tentacle-ridden Chaos Spawn, or incinerate them with multicoloured blasts of fire. He is the Oracle of Tzeentch, and wherever he goes, change is sure to follow.

This multi-part plastic kit contains the components necessary to assemble Kairos Fateweaver – towering over the footsoldiers of the Tzaangors, he makes the perfect centrepiece for an imposing Tzeentchian army. The kit features an impressive amount of customisation, with 2 different heads and his own wing tip decorations (the wings themselves can be modelled in 2 different positions.)

His Staff of Change is a particular standout, with its book and fish motif giving the whole model an extra tinge of Tzeentchian symbolism. If you build this kit as Kairos Fateweaver there is a specific right arm assembly featuring a hand containing an all seeing eye in the palm.

Daemons Of Tzeentch Lord Of Change