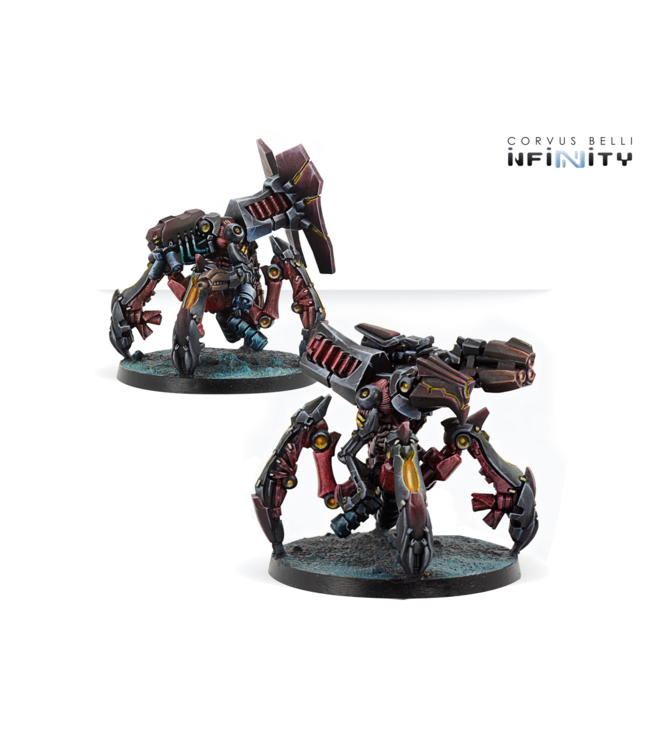 Drones are remote auxiliary units for combat support. As the long arm of the Combined Army hackers, their structural design follows their function. The front and sides of all Drone models boast redundant data acquisition panels. By means of laser beams, weak microwave pulses or VoodooTech beyond our understanding, they are able to boost the intrusion and cyberattack capabilities of their Tactical Hackers. M-Drones carry high-precision sensors linked to ‘Eye in the Sky’ spy satellites that allow them to perform continuous scans of the combat zone. To increase the radius of effectiveness of its Tactical Hackers, the Combined Army fields R-Drones, nimbler units capable of safely negotiating the battlefield in seconds. Q-Drones, with their modular weapons systems, are conceived as a mobile fire support platforms. Q-Drones are invaluable as armed reaction units for surveillance tasks or as delaying elements against enemy advance. With T-Drones, the Combined Army can deploy a reliable autonomous guided missile platform to cover the advance of infantry from the rearguard. Thanks to the guidance systems in the T-Drone warheads, and the profusion of field artillery observers, no enemy unit is safe on the battlefield.