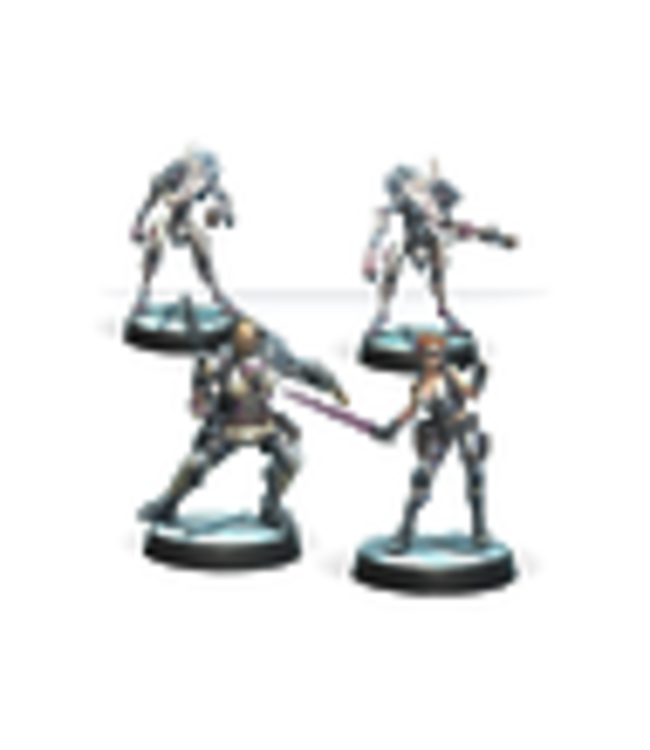 A special characters box for the Sectorial Army of ALEPH. Scylla and Drakios are the seasoned NCOs of the Argyraspides, the Double-A unit of the Steel Phalanx. Accompanied by their Devabots, Ioke and Charybdis, the flamboyant warrior and the lethal Hacker Read more..

Notes from Thamyris, the Aoidos for the Information Service of the S.S.S.: "There is no Homeridae able to speak louder, nor eat as much, than Drakios. Loud boasting and an insatiable appetite for food and women is the hallmark of the most flamboyant Homeridae of all. Without fail, you'll always know where to find Drakios: in combat, he will be where the action is, but exactly where all can see it; and in the tavern, he will be on a table bragging to all in attendance, or behind the skirt of the first girl who gets within his sights, even though it?s with his colleague Scylla that we all know that nothing will ever happen."

Notes from Thamyris, the Aoidos for the Information Service of the S.S.S.: "Scylla is a beauty and she knows well how to use it to manipulate you. Watch out or she will play you at her whim and you will end up no more than a puppet in her hands. If you ask about her name she will tell you that it is after some Princess of antiquity. Never mind that; she bears the name of that beauty who was turned into a sea monster. Or do you think it's a coincidence that her Devabot is called Charybdis? If one doesn?t get you, you will fall into the clutches of the other. In any case, you are done."

A special characters box for the Sectorial Army of ALEPH. Scylla and Drakios are the seasoned NCOs o..