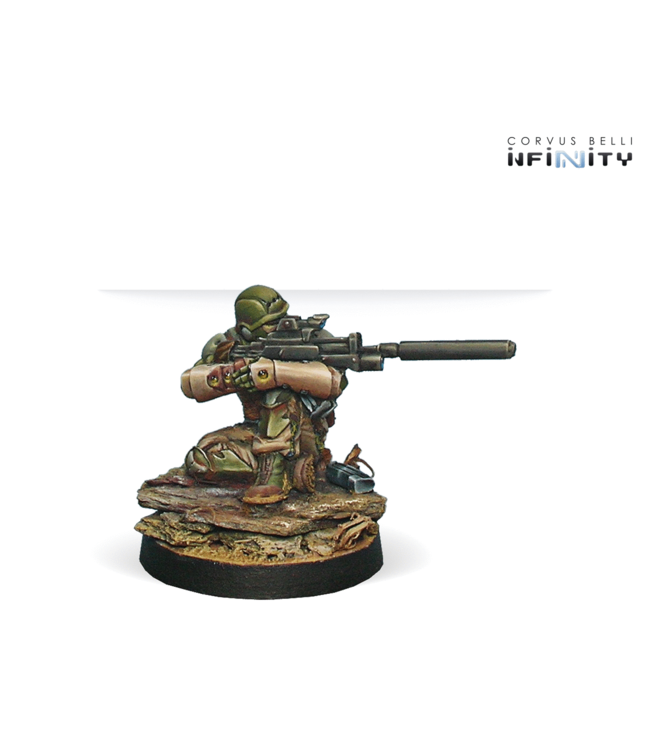 This specialist troop that is part of the Haqqislam Army. It is a good addition for both defensive and offensive lists thanks to his Regeneration ability. Read more..

The Djanbazan Tactical Group forms the Special Assault Corps of the Muhafiz, the Funduq Security and Intelligence force. They are responsible for spaceport security and protection of the Sari Han orbital base. Sari Han is an important stopover on the way to the Jump Gates in the Bourak system. Djanbazans defend Haqqislam’s entry and exit points with the mission of safeguarding all stages of the Silk trade. This means they are also willing to engage in close combat with pirates, smugglers and insurgents. They specialize in assault, boarding and security/control operations, so they are used as an anti-terrorist unit by the Muhafiz. As a special unit, members of the Djanbazan group undergo a battery of biogenetic therapies to endow them with superior physical endurance and recuperation. Then, Djanbazans are trained to fight and die, disregarding their own fears and doubts. As a result, they have a reputation for being reckless and, above all, very dangerous. It is said that they have been fighting their enemies for so long that they have become like them, and that they take care of the Sultan’s grey ops in the shadows. However, the Djanbazan Tactical Group has conducted so many covert operations that it is hard to say who they work for anymore. Some analysts believe the Djanbazan take orders directly from the Hachib, but others claim they have undertaken actions for the direct benefit of certain Silk trade conglomerates. The Muhafiz chiefs are aware that you cannot create a predator and then expect to keep it on a leash all the time. As long as their boys do everything they are asked to do, they don’t mind if Djanbazans make some money on the side.

This specialist troop that is part of the Haqqislam Army. It is a good addition for both defensive a..