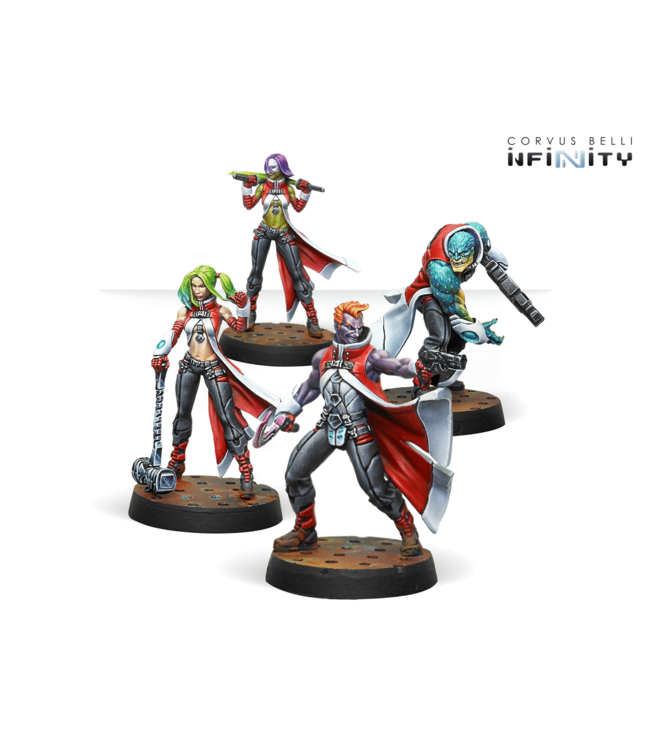 Morlock Groups scrape the bottom of the barrel that is the manifold society of Bakunin. Individuals who are deemed unfit for cohabitation in Bakunin’s public areas or private habitats, particularly those who are known to have violent or antisocial backgrounds, are assigned a Morlock Group. The reasoning is that even the worst psychopaths can contribute something positive to the ship. Morlocks consume MetaChemistry compounds that suppress their violent impulses until they can be realized productively, namely in battle. Then, the MetaChemistry that governs their behavioral releases and augments their aggressive instincts. No two Morlocks are alike, but they all have fierceness in their faces, a deranged look in their eyes and danger coursing through their clenched muscles. Any interaction with the Morlocks is tantamount to playing with matches near a powder keg; they are, in a very real sense, programmed to stir up trouble. The name of their units should tell you everything you need to know about them: the major groups are the Morlock Aufstand (Rebellion) Gruppe, the Morlock Chaos Gruppe, and the Morlock Schaden (Damage) Gruppe. Their combat methods are the logical outcome of their MetaChemical treatment: straightforward ultraviolence, running up to the closest enemy and hitting him until he stops twitching.

This box includes four high quality metal miniatures. This box is a great complement to the Jurisdic..