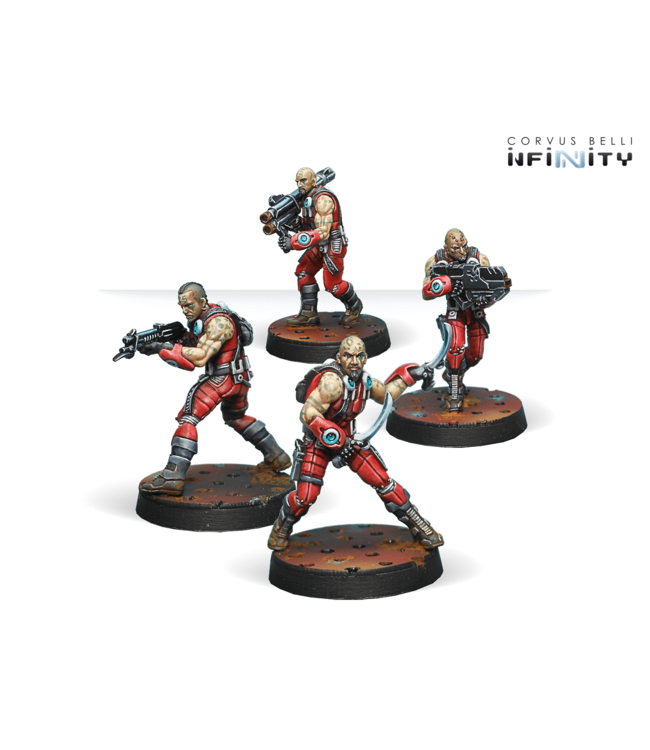 A new Infinity unit box containing all the weapon options of this troops. The Jaguars are the crazy warband of Corregidor. Former mareros, street gangers from the Maras of Lazareto, the Jaguars like do evil things with their curved blades, so be careful w Read more..

Jaguars are yet another of Juan Sarmiento’s strokes of genius. Known as “the Mexican General”, Sarmiento was one of the founding fathers of the Corregidor Jurisdictional Command. When everyone saw the maras—gang-like organizations that sprouted from the initial chaos of Lazareto—as a problem to be solved, he saw them as a reliable source of veteran warriors, made callous by a history of street violence and with the honed killer instincts of rabid felines. Law enforcement in Corregidor doesn’t mess around, so whenever Sarmiento’s Alguaciles got hold of a promising vato or tsotsi, they gave him a choice: an eternal stroll without a spacesuit, or a stint in the newfangled Jaguar unit. Most took the second option and lived to regret it. The instructors involved in the Jaguar project had the grueling task of hammering these disparate thugs from rival maras into a functioning, cohesive group. The trick was to instill in them such hatred toward the instructors that they forgot their mates used to be their sworn enemies. The unit was devised as an assault force for enclosed areas, so their training focused on hand-to-hand combat sessions in which they had one chance to beat up their instructors. They were taught combat tactics and all kinds of military procedures and techniques, but in their blind urge to get even what they ended up learning was more brutality, more cruelty and more violence.
Once graduated into a bona fide unit, Jaguars were stationed in their home modules in Lazareto, where they took over some of the policing duties previously performed by the Alguacil Corps. They immediately adopted a Solomonic role, aborting gang wars and leaving the maras alone as long as they didn’t stir up too much trouble. However, their law enforcement efforts are not why this unit is noted. Where they really shine, the reason for their continued existence, is their capacity as a shock force. They are the unit of choice of the Nomad High Command for the ardor with which they face each new combat, but sometimes their eagerness takes them one step further than Mission Control would prefer. Once set upon the enemy, their gusto for the fight makes them lose sight of the big tactical picture, and they just tend to run haphazardly towards the nearest foe. Jaguars have plenty of fire in their bellies, but they want victory at any cost so they need to be reined in a little. Even then, once they hit the ignition point, there is no talking them down.

A new Infinity unit box containing all the weapon options of this troops. The Jaguars are the crazy ..