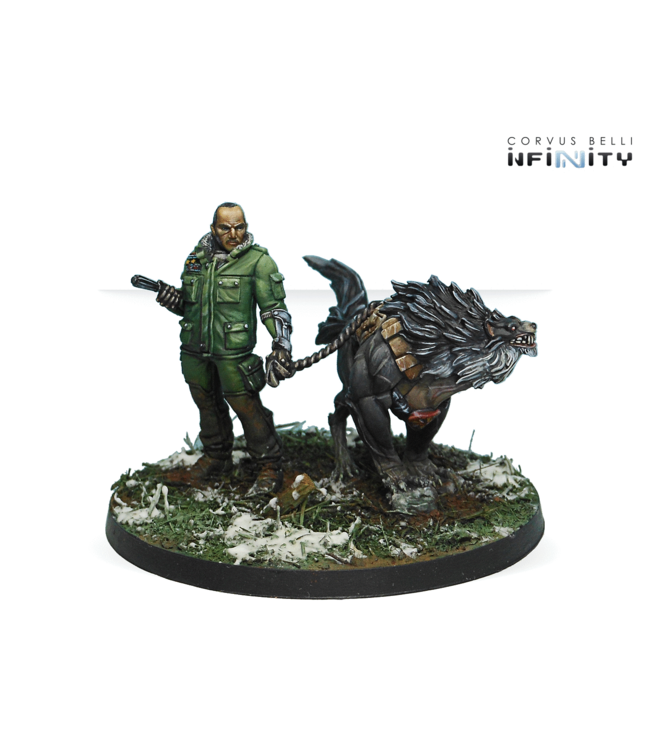 This Cossack Officer has earned a reputation as agent provocateur as much for his attitude as for his tactical and strategic planning skills. Accompanied by his faithful Grisha, the ferocious Antipode, Voronin will spread chaos wherever he goes. Read more..

Foulmouthed, loudmouthed, and without the smallest sense of tact or of protocol, Colonel Voronin’s position in the Cossack Diplomatic Corps can only be understood as a façade for his position in the Stavka, also known as the Department of Intelligence. Most people think that Colonel Voronin is the living image of the type of person who only brings problems, a bearer of chaos. He has earned his reputation as a provocateur as much for his attitude as for his tactical and strategic planning. Voronin has a dominant personality, likes to cause chaos, and to be the eye of the hurricane: to cause everything that surrounds to him fly out of control except for himself. He has inherited the wild Cossack temperament of the steppes. When he was young he took up arms in rebellion, along with other officials of Stavka, against General Fedchenko, ending the General’s iron-fisted reign of the government of Mat’. He participated in the fourth Transtartaric Campaign, the Antipode Offensives and the Ariadnan Commercial Conflicts, and at this time, he is destined for the Ariadnan Expeditionary Corps in Paradiso. In his life there has been time for war and also for love. He denies having sired four bastard children, something that they sometimes accuse him of. He swears that there are five, four of them with prostitutes and another one with the wife of an officer of the General Staff. Throughout his career, Voronin has killed many just as they have also wanted to kill him on numerous occasions, but none of this seems to bother him. He knows he will die someday, but he will do so laughing, with a good cigar in his hand and accompanied by his faithful Grisha (Гриша), the ferocious Antipode from whom he never separates. As long as that day does not arrive, Voronin will continue serving his country in public in the Cossack Diplomatic Corps, and privately in the Department of Intelligence of Stavka.

This Cossack Officer has earned a reputation as agent provocateur as much for his attitude as for hi..