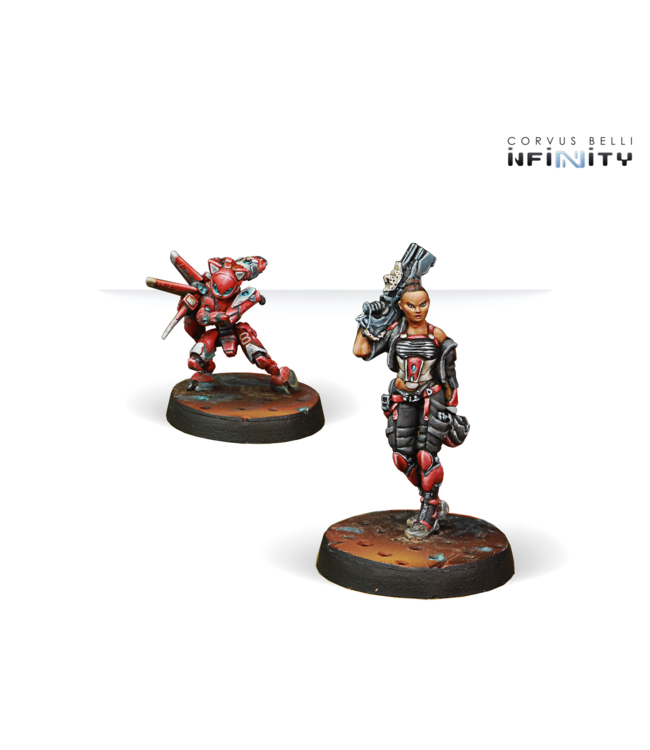 Carlota Kowalsky, Sergeant of Tomcats, is a versatile engineer who stands out above the rest of her colleagues thanks to her skills - such as Climbing Plus, which allows her to out maneuver her opponents by using her verticality to her advantage. Carlota Read more..

Carlota never thought she would end up in the army. She always thought she would enter the family tradition: space prospecting and EVA work. However, she discovered her mechanical aptitude and paid for her training and improvement classes by repairing her colleagues’ equipment. She was involved in the Base-Arakan litigation, joining the active resistance against the mercenaries of the MagnaObra Company. Captain Zakalwe, of the Intruder Command directing the defense until the arrival of the Phantom Military Force, recommended her for the Nomad army for her efforts. This enabled her to directly enter the Tomcats, the Special Emergency and Rescue Team. After an intense career, her involvement in the resolution of the C-7 diplomatic incident saw her promoted to the rank of Sergeant Major. Her new rank, including the corresponding salary improvement, has been a relief for her ruinous personal finances.
Carlota Kowalsky can be defined as one hell of a Sergeant Major, a sharp genius who won’t tolerate silliness and is more than able to demolish any misogynist stereotype. She is a woman with an extra-planetary look who is used to wearing campaign clothes. She has a face that insinuates intriguing contrasts: narrow and very dark, with sharp features and high cheekbones, fruit of the most genuine Corregidor crossbreeding. However, her facial expression is one usually associated with that of Nomad elite professionals: calm, alert, intelligent and very competent. Despite her attractive appearance, Carlota is one of the boys, and, usually, far better than them. Her comrades and superiors respect her greatly because she is responsible and never shirks when it’s time to work and get her hands dirty. A veteran of several campaigns already, and as lethal as the best holding a weapon, she is the most qualified engineering and maintenance specialist in her unit. The mechanical skills of Carlota are especially useful when fixing Moriarty, the name she gives to each new Zondcat assigned to her when its predecessor is destroyed. Poor Moriarty is in its eighth incarnation so far, and while Carlota remains in active service, it’s not likely to be the last one.

Carlota Kowalsky, Sergeant of Tomcats, is a versatile engineer who stands out above the rest of her ..