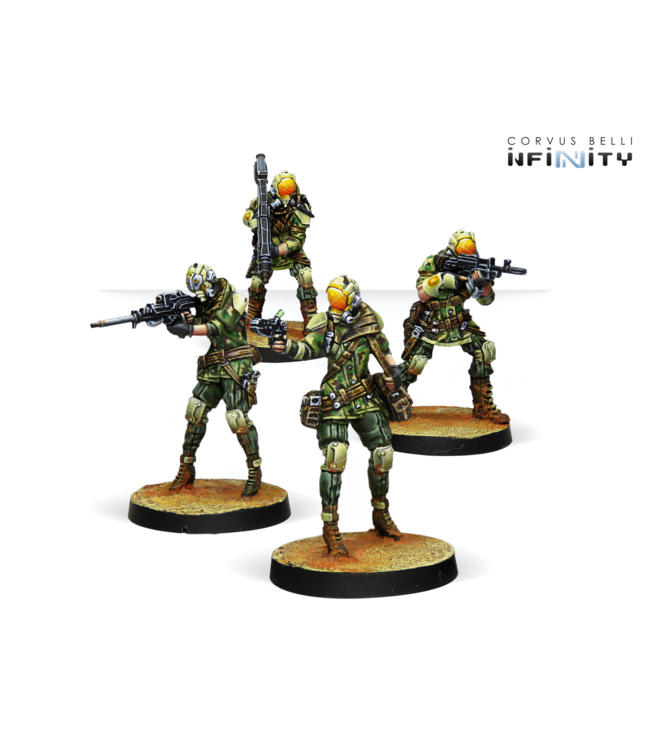 For the Brawlers, violence is always the solution. Whatever problem you put in front of these mercenaries, they will leap straight to armed assault to deal with it. So, yeah, I’d say the name ‘Brawler’ very much applies. Read more..

Spector is a man dead many times over. He’s one of the privileged few who can claim to have undergone Resurrection not once, but several times. He also enjoys the use of a Lhost, an advanced biosynthetic body to replace his own. But these privileges are also his curse, a curse that binds him to a life of danger and death. Spector is a man who made a deal with the devil—or rather with a devil.
A lifetime ago, Raoul Spector was a mercenary soldier with no loftier aspiration than hard cash. He left behind a prestigious career in the Special Operations branch of the PanOceanian Military Complex, lured with the promise of easy money in the private sector. Spector was pretty sure he had life all figured out, until a routine escort mission went belly up. There was an ambush and a firefight, and when the smoke cleared Spector and his men had killed a handful of civilians, several women and children amongst them. The local population rose up in arms against the mercenaries, and only a gravely wounded Spector was able to escape the enraged mob and survive the night. Exhausted, he broke into a luxurious estate seeking refuge. He didn’t know at the time, but he had entered the devil’s domain.
He woke up hooked up to a life support system, being watched over by a corpulent man with intense eyes. With an ironic curtsy, the man introduced himself as Kambur Bey. Known as one of the richest, most opulent Silk traders, Kambur Bey had the dubious honor of being the only Sultan to ever be ousted for the crimes of bribery and corruption instead of the usual political infighting. That meant the egregiousness of his corruption must have been truly staggering, even for the standards of the Sultanate.
Kambur Bey, an insatiable man of unspeakable appetites, offered Spector a deal: his life for his bonded labor, and not as a mere mercenary. Bey had a plan to enjoy the thrill of combat, the unadulterated adrenaline of being in mortal danger—without the actual risk of demise. He would implant Spector with a sensory recorder capable of continuous transmission, and so Bey would be able to access every one of Spector’s experiences in real time, via a full-immersion interface, from the safety of his own home.
All Spector was expected to do was to carry on with his mercenary contractor business, only picking ever more interesting, riskier jobs. To live life on the fast lane and hold nothing back, recoiling from no mortal peril. Even when mission parameters forced him off-line, he would have to return to the datasphere as soon as his mission was accomplished and upload his experiential data for Kambur Bey to delight in.
The Bureau Aegis has classified Spector as one of the most unpredictable individuals in the Human Sphere. Large-scale battles, guerilla raids, Zero-G boardings, escorts, high-speed chases, seek-and-destroy contracts, Aristeia! Underground bouts, hinterland bar brawls—Spector has done it all. Anything to relieve Kambur Bey from the tedium of real life. It’s a life in service of the former Sultan’s adrenal glands. Each time Spector’s hazardous lifestyle has claimed his life, Kambur Bey’s recovery team has been deployed to salvage his Cube and bring him back in a brand new Lhost. That kind of health insurance might sound tempting, but from the moment Spector sealed the deal, he hasn’t spent a second in real solitude. There’s always a voice in his head whispering orders, a passenger lurking behind his eyes, feeding off everything he does, feels, or enjoys. He is a man without freedom to choose his fate, under constant monitoring with no escape in sight—a multitude of devices in his body make sure that he adheres scrupulously to the deal or regrets it instantly and intensely. Thus far he has put up with each misery, each indignity—thus far. Raoul Spector is a man of his word, but every man has a limit…

For the Brawlers, violence is always the solution. Whatever problem you put in front of these mercen..