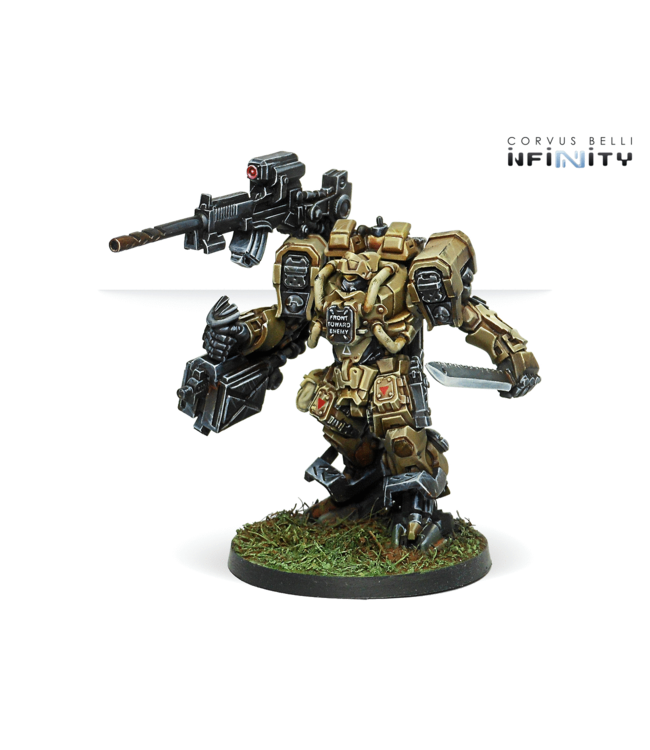 The perfect Heavy Infantry which will provide your USAriadna Ranger Force with increased firepower Read more..

The Blackjacks are not only one of the toughest and most resistant units of USARF, but also one of the most lethal because of their firepower. If they are known as “The Winning Hand”, it is because their deployment in the AO always means a sure victory without concessions to the enemy. And it is because this unit has been created to withstand the brunt of the fighting and ultimately to put an end to the enemy. The Tenth battalion was not created to take prisoners, and this is something that their members always bear in mind. After the battle, the Blackjacks walk among their fallen enemies and deliver a final, fatal shot to ensure that there are no survivors, dropping an ace of spades on each body as a business card. This sinister custom has turned that card into a symbol of death known throughout the planet Dawn.
The Blackjacks are a top level unit of the USARF, and one of the most ambitious projects of the DARPS (Defense Advanced Research Projects Services) of the USAriadnan Department of Defense. It is said that the Blackjacks entered battle just moments after being created as a combat unit, sent directly to the battlefield as soon as their status was no longer "experimental unit", having received the green light from High Command to enter active service. So eager were the upper echelons of the USARF to put them to the test in battle, and to let them perform their lethal magic, in order to silence the critics of the Blackjack program. This project of the DARPS was called into question after the first field trials, in which the prototypes of Buffalo servopowered armordemonstrated major operational problems in live-fire conditions. However, once it had passed through the lengthy and expensive test period, the Buffalo armor became one of the main components of native Ariadnan military technology.
The origin of the unit's nickname Blackjack is unclear. Some suggest it is due to the tactical black color of the test models. Others believe that it is due to the series names of the armor prototypes, which caused their test pilots to have the code name Buffalo Soldiers. Others suggest that the name came from the leader of the unit, Lieutenant Colonel Michael Cortado, a great fan of card games. Nevertheless, the origin of the unit’s name doesn’t matter, because the Blackjacks, the Winning Hand, will always be considered heralds of their enemies’ deaths.