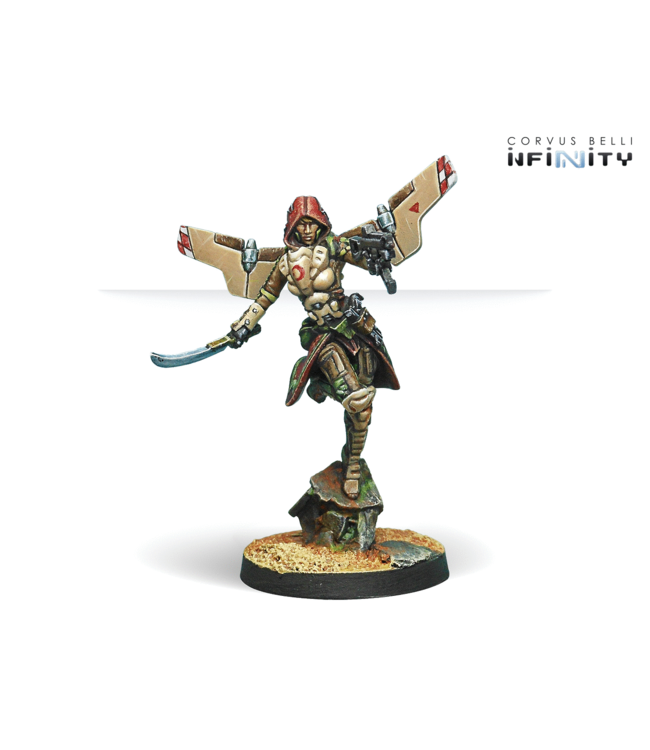 Mercenary adventurers contracted as part of privateer crews in service to the Sultan, these parachutists equipped with a Holoprojector will be an elusive target and trouble for the enemy. Read more..

Bashi Bazouk is a term which comes from the Turkish word Basibozuk, which means literally ‘damaged head’ but is usually translated as ‘without leader’. That word served to designate some irregular troops of the ancient Ottoman army.
[Extract from Babelicom, encyclopaedic web of on line information and resources, available in Maya and Arachne].
Currently, the Bashi Bazouks are mercenary adventurers contracted to be part of the corsair crews in service to the Sultan and great lords of the Silk trade. Integrated into Search and Sweep Teams, their mission is to go through a boarded ship, eliminating resistance points and searching for interesting stuff. These are the kind of labors in which none can deny their effectiveness. Although most of them possess a military past, the Bashi Bazouks have forgotten everything about discipline and respect for authority. As boarding groups they form a turbulent, obdurate and colorful gang that devastates target ships with chaotic wildness. Rogues and crooks without any conscience or respect for law, these undisciplined troops live only for their own profit and are sometimes hard to control. Their raids, and the damage they cause, are widely infamous, but the greatest scandal was the Al-Umara Station Massacre during the Silk Revolts, in which hundreds of civilians were slaughtered. Since that event, the name Bashi Bazouk has become a pejorative term. However, the utility of the Bashi Bazouks has permitted them to survive their bad reputation, and while greed still governs inter-stellar commerce, there will always be a mission for these unruly opportunists.

Mercenary adventurers contracted as part of privateer crews in service to the Sultan, these parachut..