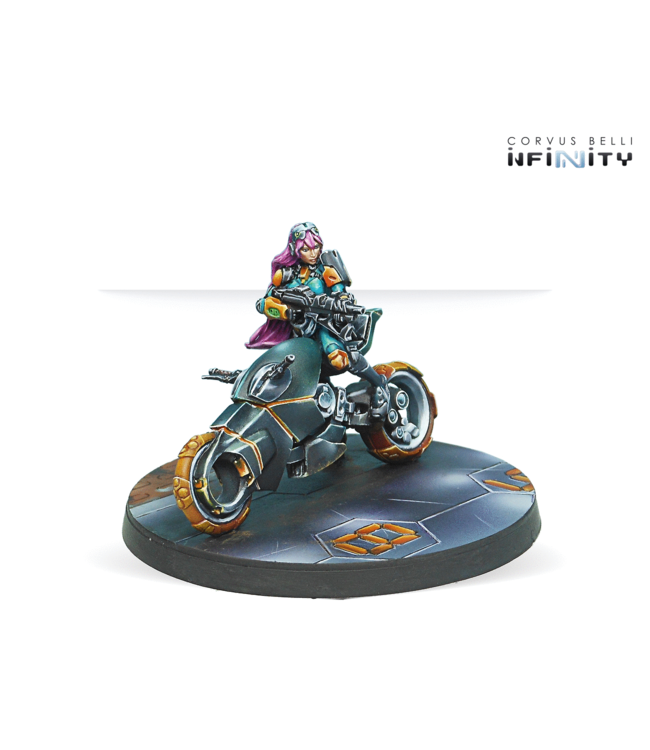 Maybe you didn’t win any official ITS Tournament past year, so you didn’t get the exclusive Bounty Hunter released as prize, but don’t worry too much, because now you can get now the motorcycle mounted version with a Boarding Shotgun. Read more..

The manhunters of the Human Sphere form a society of their own within the broader underworld of soldiers of fortune. They are not merely gunmen with a holobadge and an authorization code. It takes more than marksmanship to do their job. It also takes tracking skills to locate the prey so it can be caught or shot for the reward. But Bounty Hunters can hardly be said to possess a talent for investigation; most of them just combine their street smarts with a heavy dose of brutality and violence. The key to this business is knowing which doors to kick down and which peeps to beat up to get the leads they need. Violence, extortion, bribery... Anything goes when impunity is the norm —“No problem, I got a badge. I’m syn-dee-cated”. The Bounty Hunter Syndicate is the official organization that will take care of them and will get them the top security clearance available under whichever legal framework they are forced to operate. And near the borders of the Sphere, where business is best, there is no legal framework to speak of.
However, in spite of their unorthodox methods — or because of them — Bounty Hunters get the job done. They are agents of law and order, and as despised as they are by the Police, they often collaborate closely with law enforcement in joint arrest operations.
Even under the legal protection offered by the Syndicate, a professional Bounty Hunter will adapt to whatever work environment is at hand, since roving the Sphere is part of the job description. While in PanOceania he will pay for 24-hour online legal counseling, as he knows a single slip is all it takes for PanOceanian shark attorneys to eat him alive. While in Yu Jing, he will show the utmost adherence to the precepts of the Imperial System, and in return, he will have the maximum license you can ask for in a society that favors exemplary punishment for all criminals. While in Bourak he must be exquisitely law-abiding, for the slightest abuse will not be tolerated, and the threat of a Hassassin sanction ever looms. While on a Nomad ship, he will be given free reign as long as he shows respect to law enforcers. But it’s within the borderlands of Ariadna and Human Edge that the Bounty Hunter paradise lies: savage, isolated areas where he can enjoy the ultimate freedom of action. And yet this law of human nature is true in all places: when the silvery promise of bounty fills the air, weapons materialize and wolves fall upon their prey.

Maybe you didn’t win any official ITS Tournament past year, so you didn’t get the exclusive Boun..