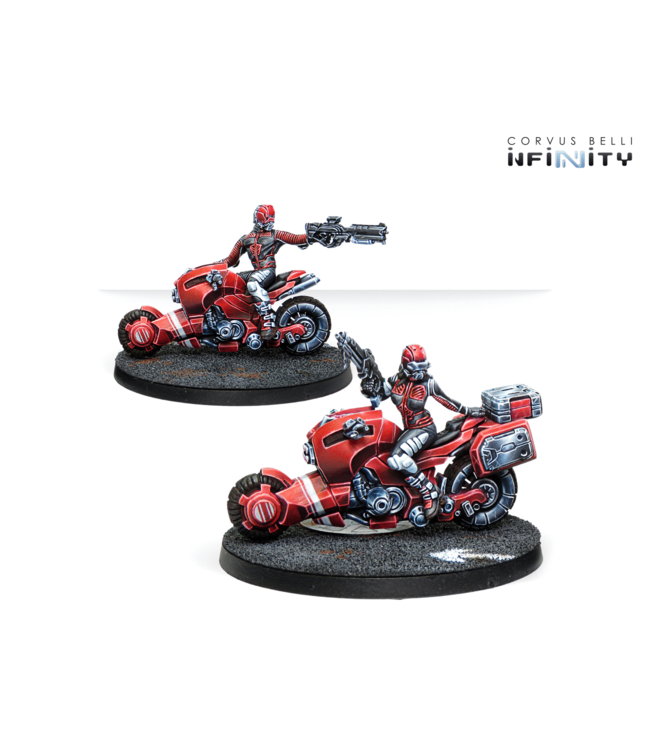 The Aragoto Senkenbutai are a motorized NA2 troop that are characterized by their offensive abilities in which their courage is an asset. They are not afraid of anything!
This box includes two high quality metal miniatures. A vital addition to our JSA S Read more..

Competition racing is legal and is exciting due to the high speeds that are achieved. On the other hand, races through town centres are illegal, though they are high adrenalin producers because of the risks involved. Driving for organized crime is also illegal and apart from high-speed driving you can also use firearms. The Army offers you the best of three worlds: Speed, high risks and all the shooting you want: on top of that, it is not only legal but you’ll get paid for it. This is the spirit of the Advance Guard Regiment, the Aragoto Senkenbutai.” (Recruitment Agent for the Yu Jing StateEmpire Army, on line service, Maya)
In a crisis-ridden and repressed society like that of the Nipponese, speed appears to be one of the few remaining escape-valves for young people. The Army has recognized and capitalized on this addiction by creating the Aragoto Regiment. In Kabuki theatre, ‘Aragoto’ means ‘rude performance’, a theatrical style employing dynamic and exaggerated movements to represent fearless and courageous heroes. And it is true that the Aragoto, mounted on their powerful, purring machines, personify the ideal character of their namesake, becoming champions of the asphalt.
According to the Kabuki code, the red of their motorbikes symbolizes strength, vitality, rectitude and valor. These heroic attributes are present in the Senkenbutai, whose function is to serve as an immediate intervention force, the spear-head of attack operations. They conduct also contingency actions against hostile elements, engaging the enemy as rapidly as possible. For this reason their machines, the TZ Tsurugi (Broadsword), have been designed by speed fanatics who studied engineering and aerodynamics. Originally conceived as propulsion unit for the air force, the Tsurugi’s motor has been mounted on a structure with maximum flexibility and all-terrain capabilities, but with a competition chassis designed for the race circuit, offering minimum fluid dynamic resistance. With these specifications, being Aragoto Senkenbutai means getting into a fight with your motor blazing and your adrenalin flowing at fever-pitch… the golden dream of any Nipponese youth.

The Aragoto Senkenbutai are a motorized NA2 troop that are characterized by their offensive abilitie..