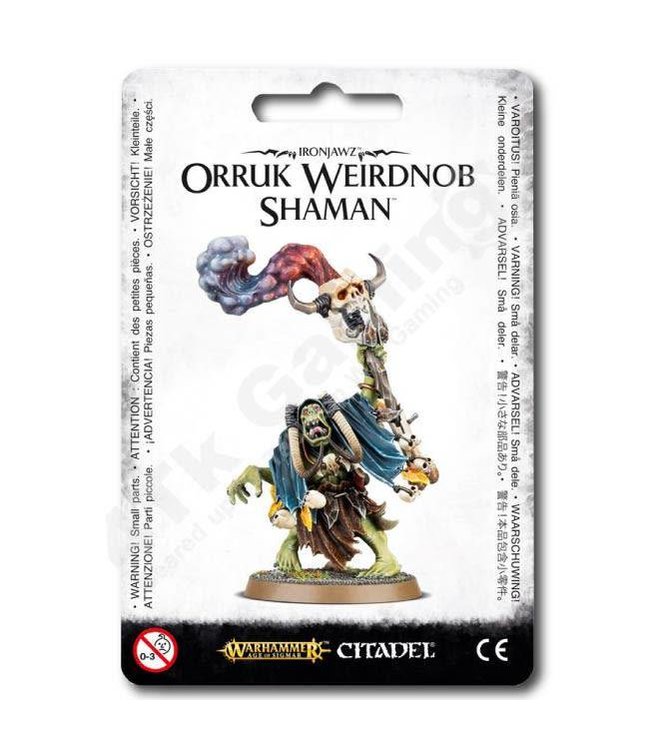 This multi-part plastic kit contains the components necessary to assemble one Weirdnob Shaman, the bizarre and unpredictable wizard of the Ironjawz. Read more..

Wildly unpredictable, savage, untamed and violent, Waaagh! magic cannot be controlled by anything with even a shred of sanity. Luckily, the Ironjawz don’t have many shreds of sanity amongst them, and the least-shredded of all are the Weirdnob Shamans. Seemingly never truly in control of their own bodies, they twist and twitch and gibber as Waaagh! energy courses unstoppably through them, staring at sights only they see and talking to nothing. The larger the gathering of Ironjawz around one of these strange orruks, the bigger the fireworks display when it all kicks off – maybe a blast of Waaagh! energy will hammer into the enemy like a particularly smelly gust, or maybe a massive green foot the size of a mountain will kick the entire enemy army in the face. Nobody’s exactly sure, and that’s half the fun!

This multi-part plastic kit contains the components necessary to assemble one Weirdnob Shaman, the bizarre and unpredictable wizard of the Ironjawz. Posed in a twitching, staggering stance as the power of the Waaagh! flows through him, he’s covered in detailed shamanic fetishes and is armed with a smouldering Waaagh! staff. 13 components, supplied with a Citadel 40mm Round base.

This multi-part plastic kit contains the components necessary to assemble one Weirdnob Shaman, the b..