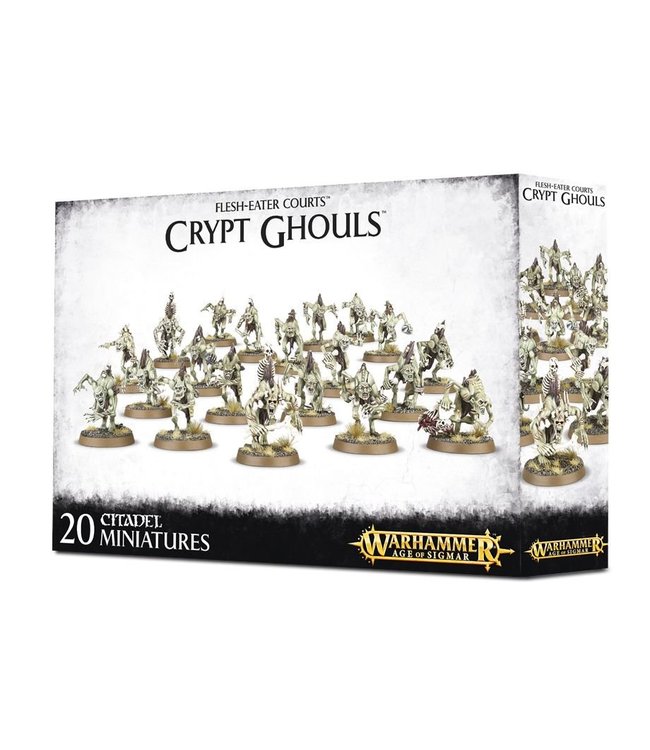 This multi-part plastic kit contains 20 Crypt Ghouls, and can be used to assemble a Crypt Ghast Courtier – warscrolls for each are in the box. Supplied with 20 Citadel 25mm Round bases. Read more..

Scuttling, repugnant creatures whose insanity pushes them over the brink of madness into the belief that they are glorious, stout soldiers of a magnificent empire, Crypt Ghouls seek out fresh, raw meat – usually by killing anything in their path. Dangerous even as individual enemies, they tend to hunt in packs, each mordant competing with the other for scraps of flesh torn from the unfortunate dying. Should they catch a glimpse of their king they will fight all the harder – after all, who would not wish to be noticed by a court so glorious?

Hissing captains of the mordants, Crypt Ghast Courtiers move among the pale ranks
of the king’s army to direct the cannibal formations. They drive more Ghouls into the
fray, while seeking out gruesome trophies to bestow upon their ‘men’.

Crypt Ghast Courtiers are a small but essential part of any Flesh-eater Courts army. Fighting alongside your Crypt Ghouls, they pack a nasty punch in melee - but where they shine is in support. These guys can restore more models to your Crypt Ghoul units, as well as granting them extra attacks - turning them into an ever-regenerating wall of death!

This multi-part plastic kit contains 20 Crypt Ghouls, and can be used to assemble a Crypt Ghast Cour..