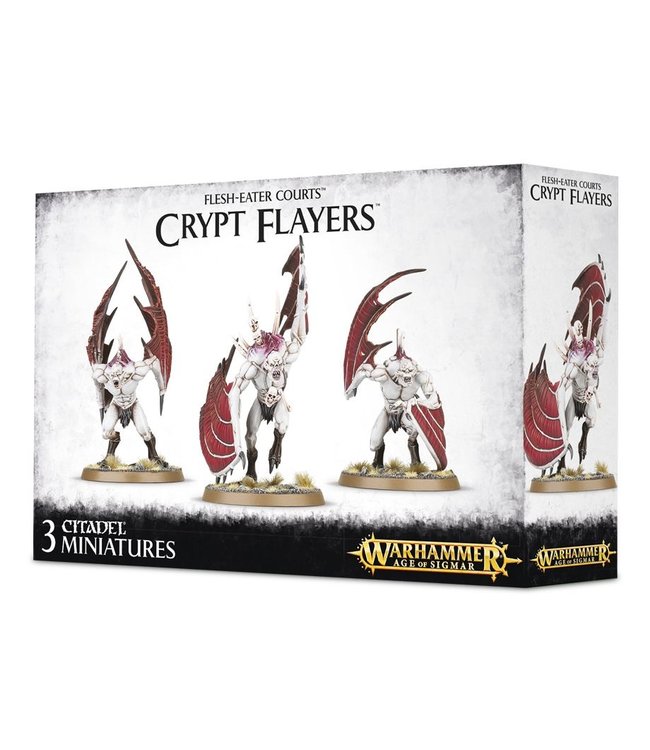 Vargheists are the darkness in a Vampire's soul made manifest. They are towering winged humanoids, each several times the size of a man. Though the Vargheists were once noble Vampires, they have since devolved into ravening predators desperate for the taste of blood.

Vargheists feature hideous, wiry musculature and clawed feet, and they possess strange fang-filled faces, crests and enormous fibrous wings. The kit comes with a variety of heads (none of which are handsome), and six sets of arms - three clinging on to a variety of decayed body parts, and three with wings, giving you plenty of modelling options.

Haunting the night as vague silhouettes framed against a moonless sky, Crypt Flayers search tirelessly for enemies of their glorious court. Once spotted, their prey is swept upwards, gleaming fangs sunk deeply into their necks, leaving nothing behind but a drop of spilled blood. Horrifying to behold, Crypt Flayers are twisted monstrosities, mockeries of men who yet believe themselves blessed, enchanted examples of strength and power, regarded with awe and adulation by their low mordant kin.

The malformed monstrosities known as Crypt Horrors are, thankfully, a rare sight, though in times of open war their shambling forms can often be seen marching alongside the armies of the Ghoul Kings.

Crypt Horrors feature hideous, wiry musculature and clawed feet. They display a number of boils, scars, with ruptured, tendon-exposed flesh along their spine, making quite the disturbing addition to your collection. The kit comes with a variety of heads (none of which are handsome), and six sets of arms - three clinging on to a variety of decayed body parts, and three with wings.

This multi-part plastic set contains 62 components and three Citadel 50mm Round bases with which to ..