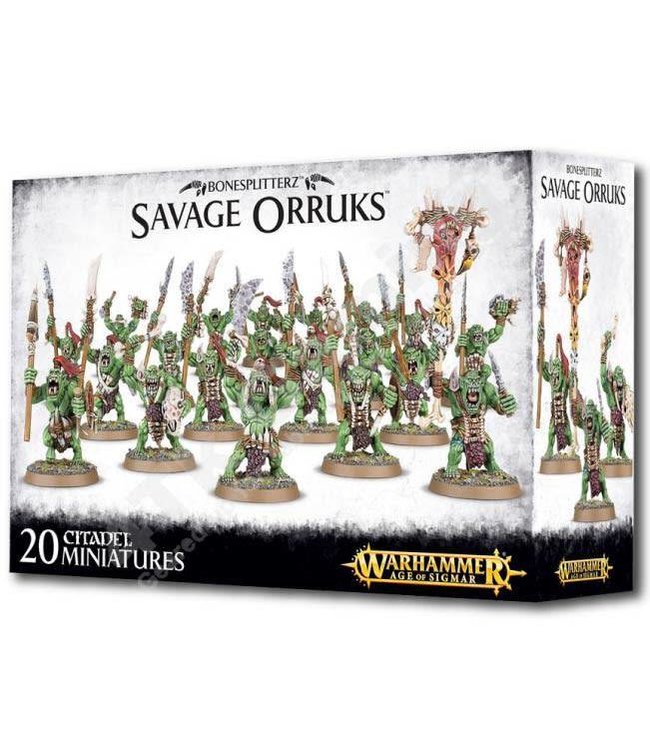 This multi-part plastic kit contains all the parts necessary to assemble 20 Savage Orruks, armed with either chompas or stikkas and bone shields. Optionally, they can be assembled as Savage Orruk Morboys or Savage Orruk Arrowboys carrying Stinga Bows. Read more..

This multi-part plastic kit contains all the parts necessary to assemble 20 Savage Orruks, armed with either chompas or stikkas and bone shields. Optionally, they can be assembled as Savage Orruk Morboys, with chompas and toof shivs, or Savage Orruk Arrowboys carrying Stinga Bows. There are options for a Boss, Bone Totem, Skull Thumpa, and a team of two boyz carrying a big stabba. The kit comes supplied with 20 Citadel 32mm Round bases.

Sometimes, orruks from the various clans in the mortal realms just sort of… wander off. Often, they end up in a Gob Rukk of the Bonesplitterz; they’ll abandon complexities of life like metal weapons and clothing, cover themselves in scrawled tattoos and lash together a basic flint spear. This might make them sound a bit primitive and weak – this is far from the case, as Savage Orruks, enthralled and driven by Waaagh! energy, band together in their hundreds to become an unstoppable avalanche of maddened green flesh, rolling across the realms and ruining everything in their path.

The Bonesplitterz are all mad, but some are more mad than others. Savage Orruk Morboys, impressively, have a reputation even amongst their peers for being particularly insane. Huge, frothing savages, completely without any regard for safety or self-preservation, overwhelmed entirely by the power of Gorkamorka, they are a law unto themselves, controllable only by the clan’s Wardokks (and even then with great difficulty.) No-one is exactly sure why some orruks become Morboys, but it’s likely due to the consumption of a particularly large monster – absorbing the spirit of something so fearsome would make anyone rampage across the realms, jabbing pointy things into anything that moves. Morboys simply happen to be especially good at this.

Exceptionally talented, gifted marksmen despite their madness, Arrowboys don’t need impressively-carved ornate bows to wage their wars. Their primitive weapons become instruments of precise, deadly destruction in their hands, aided by Waaagh! energy. Equally skilled at shooting on the move as standing still (which few Bonesplitterz do for very long), they’re also adept at close combat, cheerfully swinging their bows about like clubs, smashing in teef and taking no prisoners.