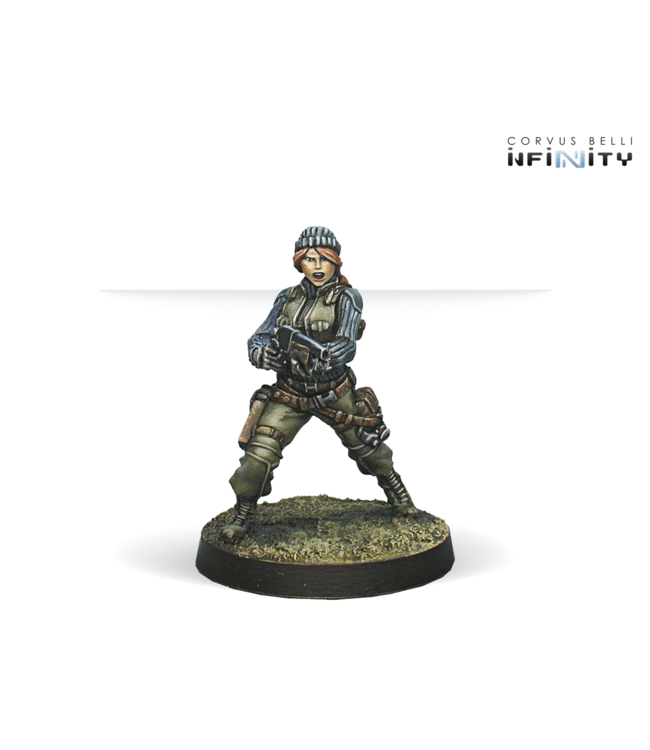 Finally the first Infinity character released has been re-sculpted. Largely demanded by all Ariadnan players here comes this charismatic ex-smuggler and assault commando. Infiltrate her behind the enemy lines and hear how sings “Ramona” her powerful shotg Read more..

Uxía McNeill is a five-and-a-half foot force to be reckoned with. Curt, temperamental, violent and foul-mouthed, she’s an old-school thug. Or, as she was often called in her neighborhood, ‘a right cunt’. She has always been an upstream swimmer, a rebel without a cause, insubordinate to the pre-established values of society. After being kicked out of two schools and a reformatory borstal, she embraced the wild side of life: she became lieutenant of a street gang, the “Scots Razors”, and then joined an Irmandinho smuggling network. She has been fired from every single job she’s taken, and she’s only taken them to put the police off her scent. On the other hand, she has survived four years in the Caledonian army. The recruiter was astonished to see such a rowdy woman show such outstanding talent for stealth and covert ops. After a period of general training that was atypically long (due to all that detention time), she joined the Highlander SAS Regiment directly. There, Uxía realized that her aim in life was not only to shoot at people, but to outwit the authorities while doing so. With the SAS she can carry out the bold tactics she learned with the Irmandinhos. As a young woman, she had to acquire the skills to evade patrols when in her smuggling runs, and now she can act under the radar of any security network. However, Uxía’s love for brawling and commotion makes her less than ideal for covert surveillance ops. Once the enemy is in her kill zone, she gets tunnel vision and starts throwing grenades and insults left and right, and then makes music with her beloved ‘Ramona’, her trusty shotgun.
“I know a lot about how to destroy buildings and vehicles, I also know how to enter and exit without being detected. In addition, I am an expert in lying, robbing, kidnapping, above all, killing. That is my job and I do it well and with pride. But you already have all of this in my file, so… Why are they making me waste my time?”
Corporal Uxía McNeill, 1st S.A.S Regiment. Fragment of the evaluation interview for the Ariadnan Expeditionary Corps.
The question that we should ask about Uxía McNeill is not why, after so many years of service in special operations, it she is still a Corporal. What we must be asking is how can it be that a woman with such a history of misconduct and infractions continues to be part of the Ariadnan army.
Let's take for example the case EH-5B004929, in which you will find an attached file. The Military police and the military public prosecutor were totally convinced of the culpability of Corporal McNeill and in the rerouting of weapons and military provisions to an Irmandinho contraband network, for their sale on the black market. Nevertheless, the military judge overruled the case for “lack of proof”. It is rumored that there was pressure from the highest levels of the military to close the case without a formal investigation. We believe that all of that framework was one of the ways of financing the clandestine black operations of the Stavka, and that Corporal McNeill is one of its principal undercover officers.
Which leads us to what should be our primary subject of investigation. Why would Stavka send us one of its best secret agents while making us think that she is no more than a simple combat commando with a bad temper?
Lieutenant Mary Cavendish, Psi Unit, O-12 Military intelligence, report for the Commission of Pursuit of the AEC. Sessions on board the Aegis Bureau frigate Categorical Imperative, in orbit around Paradiso.

Finally the first Infinity character released has been re-sculpted. Largely demanded by all Ariadnan..