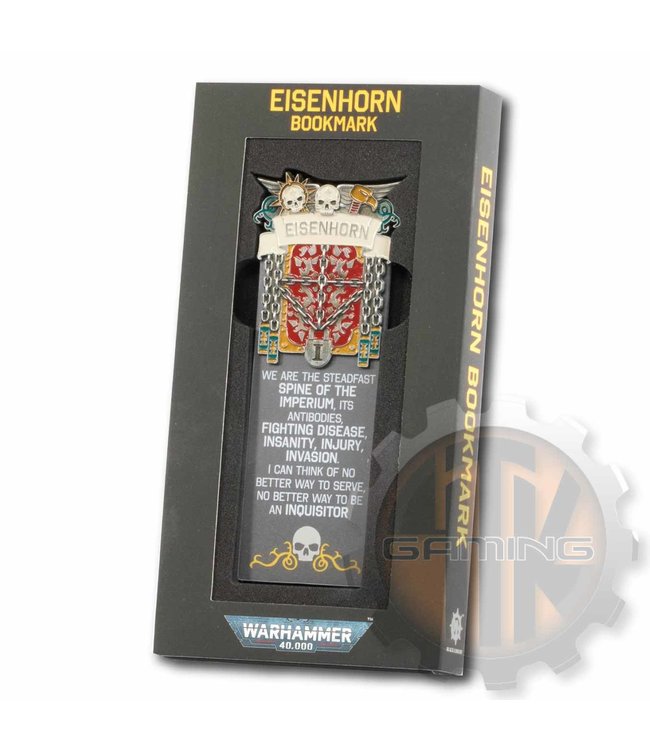 Stylish bookmark inspired by Inquisitor Eisenhorn
Features the iconography of the Inquisition
Includes a quotation by Gregor Eisenhorn Read more..

When it comes to servants of the holy Inquisition, few are as dedicated or relentless in the pursuit of their enemies as Gregor Eisenhorn. A forbidding character, remorseless with his foes, Eisenhorn's willingness to cross any line to vanquish the alien, the daemon, or the heretic has seen him branded a dangerous radical by many of his former peers.

The truth, though, is that none are more devoted to the throne than he and, damned or not, Eisenhorn has ever stood between the Imperium and its destruction.

This bookmark is themed around legendary Inquisitor Gregor Eisenhorn. Made of metal and enamel, it is topped with a crest bearing Eisenhorn's name, as well as his iconic force staff and his force sword Barbisater, atop the chained book and other symbols of Inquisitorial office. On the front it bears a quote from Eisenhorn himself, describing his role defending the vastness of the Imperium.

Stylish bookmark inspired by Inquisitor Eisenhorn
Features the iconography of the Inquisition
Incl..