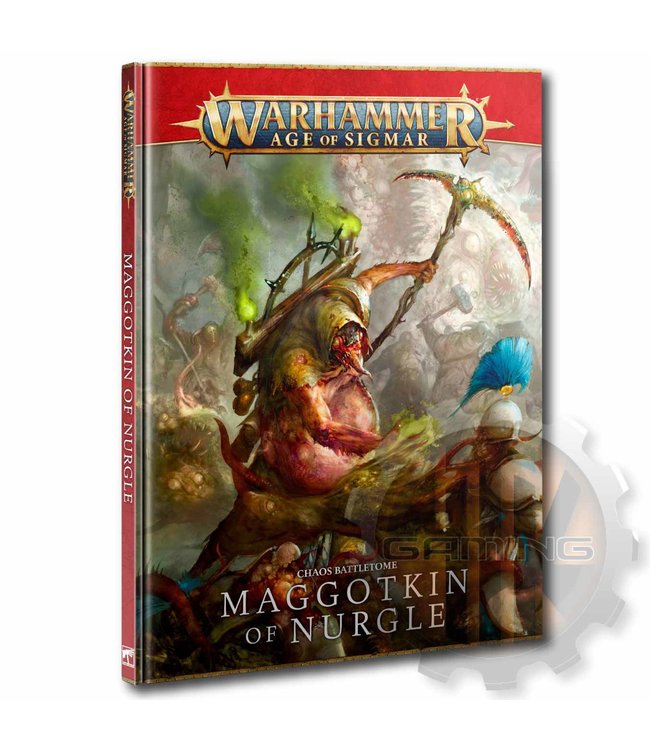 A vital accompaniment for your Maggotkin forces
Contains everything you need to know to corrupt the realms
Bloated with essential background information and art Read more..

To the tolling of rusted bells, the Maggotkin bring disease and despair to the realms. Revolting worshippers of Nurgle, the Chaos God of plagues and entropy, they live to bring others into his fold by sharing with them his foul gifts. Given strength by the maladies that blight their flesh, the Maggotkin serve Grandfather Nurgle with furious zeal. Armies of infected mortals fight alongside droning plague-daemons, spreading pestilence to all and sundry. They would not see the realms burn, however. Instead, they seek to transform them into reeking, squelching extensions of Nurgle’s Garden, writhing and pulsating with disgusting life.

In this book, you'll learn everything there is to know of the foul pestilences of Nurgle and his corrupted followers who wage war with rusted weapons and diseased touch. Discover the garden of Nurgle and Grandfather's never-ending quest to extend his rotting gifts across the whole of the Mortal Realms, as well as the feculent legions that march out to spread entropy and decay.

- A pestilent bounty of lore and background information all focussed on Grandfather Nurgle and the daemons and mortals that live only to spread his poxes
- Stunning art that covers the repulsive Maggotkin hordes in all their bubonic beauty
- 27 warscrolls and pitched battle profiles that cover everything from the mighty Glottkin brothers to the rotting Putrid Blightkings and the lowliest Nurglings
- Allegiance abilities for your Maggotkin armies that cover how your forces infect their enemies with diseases, how to manage Cycle of Decay, as well as command traits, artifacts of power, and the 6 legions and contagiums of Nurgle
- 7 warscroll battalions for Path to Glory narrative campaigns
- Path to Glory campaign rules allowing you to undertake quests to seed the garden of Nurgle and fight across blighted battlegrounds
- Content for matched play, including 4 grand strategies, 6 battle tactics, and 2 core battalions
- A wonderful photo showcase covering the menagerie of morbid miniatures which make up Maggotkin armies, and guides for how to paint your own army
- Background information on every Maggotkin of Nurgle unit, including characters like Rotigus, and Horticulus Slimux

A vital accompaniment for your Maggotkin forces
Contains everything you need to know to corrupt the..