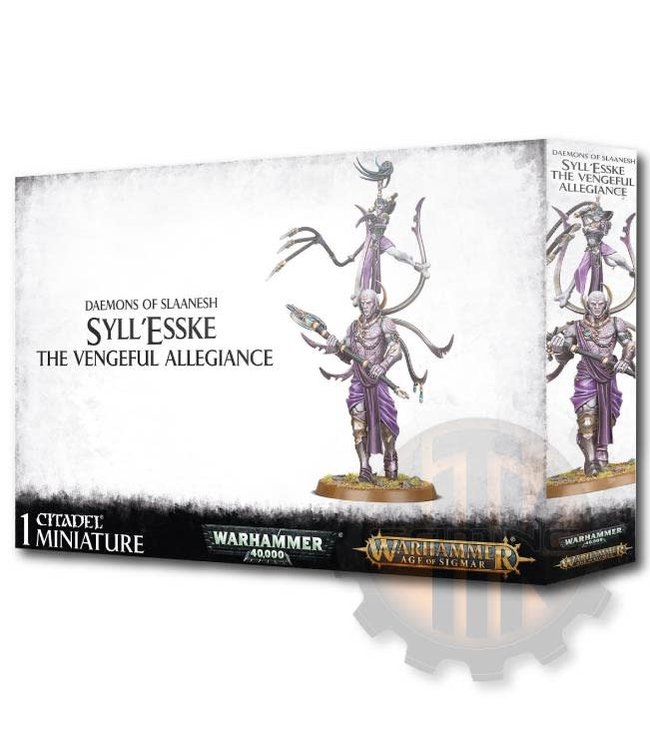 Slaughter foes in close combat with a tag-team of Daemon Prince and Herald
Command your Slaanesh and Daemons armies to greater heights of carnage
Use in both Warhammer 40,000 and Warhammer Age of Sigmar Read more..

Syll Lewdtongue has inspired thousands of warlords to acts of tyranny and misrule, but since uniting their powers with the megalomaniacal Daemon monarch Esske, the Herald of Slaanesh has become a force of conquest like no other.

Combine the might of a Daemon Prince and the cunning of a Herald of Slaanesh, and you get Syll’Esske – a terrifying tag-team skilled at carving a bloody path across the battlefields of Warhammer 40,000 and Warhammer Age of Sigmar alike. Capable of piling in and attacking twice, Syll’Esske is fantastic as a front-line combatant, as well as being armed with an arsenal of support abilities that’ll empower the Daemons they fight alongside.

This kit is supplied in 20 plastic components, and includes 1 x 50mm round base.

Slaughter foes in close combat with a tag-team of Daemon Prince and Herald
Command your Slaanesh an..